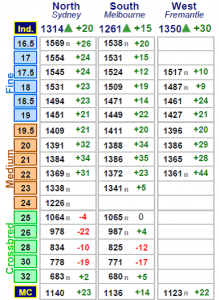 The AWEX Eastern Market Indicator finished the week 17 cents up at 1282c/kg and brokers passed in 4.3 percent of the 53,626 bale offering, with the Australian dollar at US69.40 cents, putting the EMI in US$ terms at 890 cents.

Mr Plunkett said there was a limited supply of Merino fleece in Melbourne and these wools surged as much as 50 cents through the mid-microns, although 30 cents was more typical.

“The better types found good support, but it was the lower spec types which carried the market higher as buyers sought to secure quantity at the limited offering,” he said.

“Sydney and Fremantle joined the action on Wednesday and followed the lead set on the preceding day.

“The medium and broader range of 20-22 microns was again the centre of attention,” Mr Plunkett said.

Mr Plunkett said Melbourne was the true barometer on the day and generally held steady, although the support was unconvincing and a softening noted over the day.

Thursday’s market followed suit with a cheaper market, although the margins were more substantial, he said.

“The east coast was generally 15 cents lower while Fremantle was around 20 cents cheaper.

“Despite the falls late in the week the market still finished ahead with most of the Merino range around 20 cents higher than pre-Christmas levels.”

“The largest offering of crossbreds in 12 months struggled and mostly closed lower for the week.

Merino Cardings firmed 20 cents, holding firm through to the close. More than 60,000 bales are forecast next week; an offering of that size would make it the largest sale in five years, Mr Plunkett said.

Australian Wool Innovation’s weekly market report said favourable exchange rates and fresh sales by exporters were the predominant factors behind the good start to the calendar year and were further buoyed by some large offerings, but of varying types.

Major currency fluctuations (mainly the US$ v A$) had the most influence on the local market as the rate at the resumption of auctions was 3.5pc in favour of those using US$ to purchase wool, hence the keen appetite of local exporters and indent buyers, the AWI report said.

“With the cheaper exchange, although the market locally went up in A$, flow-on benefits were extended to the majority of overseas purchases as the EMI when expressed in USD fell 21usc/clean kg to 888usc/clean kg.

“Once again the stronger enquiry appeared to centre around the less expensive end of the market, with the broader Merino fleece, all carding types and crossbred descriptions mainly being sought.

“The finer end of the Merino sector was not ignored though, as some good European orders helped demand for these qualities and push the price in a positive direction,” the report said.

“With a soft conclusion this week, some rationalization may occur, as buyers are given the opportunity to pick the eyes out of the selection without placing too much upward pressure on buy-in price levels.

“On the other hand, the lower US prices may attract further interest and keep the market buoyant.”