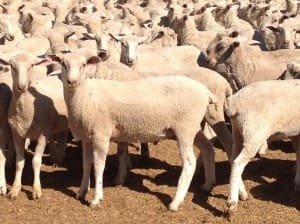 But despite dry conditions affecting restocker, light and Merino demand in some markets, rates for these were generally firm to only slightly cheaper.

Demand for good quality well-finished trade lambs was solid in most centres, but secondary lambs in small lots were discounted.

With more lambs available after Easter, heavy lamb prices fell by up to $10 at Bendigo in Victoria, by up to $9 at the South Australian Livestock Exchange at Dublin and up to $12 at Naracoorte. In New South Wales heavy lambs sold up to $7 cheaper.

Meanwhile across the eastern states, processors lifted over-the-hook prices to try to attract more direct supplies away from saleyards.

Tasmania’s OTH rates for sheep and lambs were quoted as unchanged and Western Australian data was unavailable when this report was published.

The NLRS said with the continuing dry conditions and the first sale for a fortnight, numbers lifted considerably. Some excellent heavy weight lambs and a fair selection of trade weights were yarded.

Most grades were represented in a mixed yarding of mutton. Light weight ewes were around firm and the better medium and heavy weights were $7-$11 dearer. The 2 score ewes sold from $35-$73. The better 3 and 4 score crossbreds made $64-$113 and Merinos made to $115. Prime conditioned Merino wethers sold from $105-$118.

The NLRS said lamb quality was fair to very good, with well-finished trade and heavy weights well-represented. Quite a few plain conditioned and secondary quality lots were penned. The usual trade buyers attended and there was extra restocker activity compared to the previous sale before Easter.

Well-finished lambs generally sold cheaper than the previous sale, with demand not as strong. An increase in estimated weights did see some dollar per head price increases. Secondary quality old lambs also sold to a cheaper trend, more so than that of the well-finished good quality lots. The increased restocker activity had little positive effect on prices with seasonal conditions putting pressure on prices.

Sheep quality was very mixed in a yarding that included few wethers. The market changed for plainer condition sheep when compared-the pre-Easter sale. Well-finished medium and heavy weight sheep sold to a slightly dearer trend, with some weight-related price increases.

The NLRS said lamb quality was good, with a reasonable percentage of trade and heavy slaughter lambs. The regular buyers attended, but the mood across the sale was subdued, with little urgency in bidding.

Demand for heavy export lambs from the major processors eased and this category recorded the severest price corrections of up to $10. Price results for trade weight lambs varied on quality, with the top pens in good shape and carcase finish holding their value. However, plainer types and small pen lots were discounted, resulting in varying market conditions. Light weight kill lambs and store lambs sold to restockers were often dearer.

Most export lambs, over 28kg cwt, sold from $142-$162, with only a handful of sales higher for those in top condition. Heavy lines averaged close to 480c/kg, but there were significantly lower rates in places. Demand from the major domestic processors for good trade weight lambs remained solid at $130-$144, with the best of these making 520-550c/kg. Bidding on plainer trade weight lambs fluctuated from $105-$125, with most estimated at 490-510c/kg. Merino lambs also sold to fluctuating demand, with the best supplementary fed types making up to $125. Strong demand from store buyers spiked prices for light lambs.

Sheep were dearer in all categories, including heavy crossbred ewes, which sold from $82-$110. Heavy Merino ewes in a big skin topped the sale at $115, while the lead runs of Merino wethers sold from $91-$105. Top quality drafts of sheep sold to processors made 280-340c/kg.

The NLRS said lamb quality was good, with all weights and grades offered.

Extra heavy lambs made to $185, with the better covered domestic lambs selling from $123.50-$143-be close to firm on last week. Lambs generally sold a few dollars easier, with heavy and extra heavy lambs $2-$4 down on last week. There were large numbers of lighter lambs suiting restocker, feeder and processor orders. These were keenly bought by orders from Swan Hill, Bendigo, Albury, Mallee and local areas at $85-$123, with lighter drafts making $45-$75. Light weight 2 score lambs sold from $74-$88.

The NLRS said the crossbred and Merino lambs sold to generally easing competition from the usual trade and processor buyers.

Despite the increase in numbers, fewer heavy weight crossbreds were yarded, but prices for these lambs eased significantly. Large number of Merino lambs were yarded and although prices eased, they didn’t suffer to the same extent as their crossbred counterparts. Feeders and restockers operated on ultra-light weights and light weights and a few speculated on heavier crossbreds.

The NLRS said lambs again dominated the market, with good supplies of prime heavy and trade weights along with large numbers of secondary trades and light stores. Buyers from all sectors were present, but heavy direct to works supplies meant principal lamb buyers were less active.

Lamb prices slipped on the heavier weight and secondary trade weight drafts, but light and store light weights held close to firm. Light store lambs sold from $30-$65 to be up to $4 dearer. Lighter lamb suitable for air freight processors and restockers made $55-$90, equal to last week. Trade weight lambs were around $5 easier, with lambs lacking finish and secondary drafts most affected. Better trade lambs made $85-$110, close to averaging 460c/kg. Plainer drafts mostly sold to restockers for $75-$100 and a 420c/kg average. Heavy lambs made to $115 and were also around $6 cheaper.

Ewe supplies also increased with some large drafts of medium and heavy weight mutton offered. Ewe mutton and export wether prices were stronger with extra competition. Light weight and conditioned ewes sold from $25-$63, up slightly on last week. The 2 score medium weight mutton suitable for processor orders were up $3, making $44-$72, for close to 280c/kg average. Better conditioned and heavy weight ewes made $58-$84 and were also up to $6 dearer. Wether prices were mixed, with the better wethers dearer. However, plainer and store wether drafts barely maintained last week’s prices. Export weight wethers made $80-$110 and were around $6 dearer, while the restockers paid $40-$90, $2 down on last week. Rams were not in demand, with ram lambs selling to $86 and young drafts for export orders making $20-$77. Old rams were difficult to sell, with most making $5-$15.