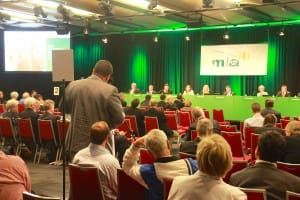 No less than five peak councils and other industry sectoral groups have anointed new chairmen/presidents in the past few weeks, leaving a prospect, at least, of lack of continuity in cross-sectoral industry discussions.

Here’s the list of national industry bodies, either peak councils or service delivery companies, that now have ‘newcomers’ at the helm as elected representatives, or operational heads:

“It’s not ideal, in terms of continuity, but I can’t see the unusual cycle having too much bearing, either at Red Meat Advisory Council or Safemeat Council level,” RMAC chair, Ross Keane told Beef Central this morning.

“Both Howard Smith and Jeff Murray have deputised for their former presidents on both boards at different times in the past,” Mr Keane said.

“Simon Crean, as the new ALEC chair, is perhaps a different ballgame, because he is new to the industry, having attended only one previous meeting. But I think he will being a valuable skills-set and input around the industry table,” he said.

“Each new sectoral representative will bring their own style to industry-wide discussions, but that’s a good thing. I think it will be reasonably seamless.”

Mr Keane said it was ‘somewhat coincidental’ that so many sectoral groups had changed over at the same time.

“Both Sheepmeats Council and Cattle Council can go to four-year terms if they choose, but in this case both have decided to elect new heads a year early.”

Among other peak councils, the current president of the Australian Lot Feeders Association, Don Mackay, has at least another year to serve, as does the Australian Meat Industry Council (Frank Herd as board chairman) and Processor group chairman (David Larkin).

All three would provide valuable continuity with the previous RMAC and Safemeat board membership, Mr Keane said.