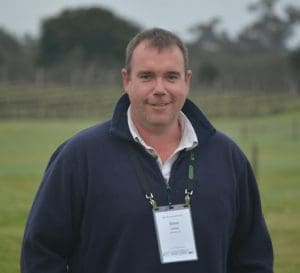 A LAMB survival trial in south-west Victoria is indicating smaller mobs at moderate stocking rates might maximise the number of lambs weaned per hectare.

Preliminary results from the first 12 months of the improving twin lamb survival project show lower mob sizes lead to better survival, but the cost of temporary fencing to achieve the change could be prohibitive.

The project is part of the Meat & Livestock Australia Producer Demonstration Site program and is being undertaken on four farms in the Willaura region.

Steve Cotton from Dynamic Ag Consulting is managing the project and said farmers around Willaura with mixed cropping and sheep businesses wanted to improve their twin lamb survival rates. About one-third of lambs born in the area don’t survive.

“The farmers are getting good scanning results, but fail to get the numbers through the marking cradle,” Dr Cotton said.

The trials are using temporary fences for five weeks during lambing to halve mob sizes and gauge the impact on survival. The project will continue for the next two years.

Dr Cotton said preliminary analysis of the first 12 months of data shows that when the mob size is halved there is improved survival. However, when the stocking rate becomes low relative to the size of the paddock, the number of lambs weaned per hectare goes down.

“Preliminary data suggests we’re better off to maintain a relatively modest stocking rate but halve the mob size to improve survival and then maximise the number of lambs weaned per hectare,” he said.

The trials are being conducted on four different paddocks on each farm with variations of higher, same and lower stocking rates and temporary fences to change mob size.

“We know if farmers go lower in mob sizes they get better survival but that’s not necessarily practical for large scale commercial livestock and cropping enterprises because of the size of these paddocks,” Dr Cotton said.

“We’re trying to develop guidelines to optimise the survival of twin-born lambs while considering the costs of putting up temporary fencing.

“In the first year we have seen a response across all farms, although there is variation and we want to verify figures during the second and third years,” he said.

“It’s early days but it’s exciting and this project has the potential to improve the number of lambs at marking to improve profit.”