Ewe supplements for improved lamb survival to be tested 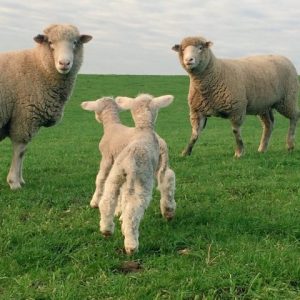 DIETARY supplements to potentially boost national lamb survival in late pregnancy and at birth by at least 10 percent will be tested in South Australian research.

A range of dietary additives showing potential to improve the viability of newborn animals when supplied in utero are undergoing the first comprehensive trials in sheep in Australia.

The Meat & Livestock Australia project aims to identify compounds with the biggest potential to boost a lamb’s ability to survive and thrive in late pregnancy and the days immediately after birth. If successful, these will contribute to higher whole-flock productivity and profits on-farm.

“If supplements are feasible, we anticipate lamb survival rates could increase by about 10pc on average – and more for Merino flocks – which means an extra 10 lambs for every 100 joined.

“Benefits will flow to producers from having more, high value lambs and fast-tracking numbers in self-replacing flocks,” Dr Kleemann said.

The ‘New approaches to increase the weaning rate of the national sheep flock’ initiative is one of 12 on-farm research, development and adoption (RD&A) projects to receive MLA investment in 2017-18, instigated through the organisation’s regional consultation process. This process enables red meat producers to have input into the direction of RD&A funding that is most relevant to them for their environmental conditions.

Previous MLA research has recognised poor lamb survival pre-weaning is a major source of reproductive inefficiency in the national sheep flock and this new investment will help producers fine-tune their nutrition and management tactics.

MLA program manager – sheep R&D and objective measurement, Richard Apps, said it was particularly targeted at finding dietary supplement options for twin-bearing ewes in the second half of gestation, but would also apply to ewes carrying a single foetus.

“Survival rates for twin and singleton lambs across Australia’s sheep flock average about 70% and 90% respectively and this has not changed in many years.

“For the national Merino flock, the average is lower at about 50pc and 75pc respectively,” Mr Apps said.

“Improving these rates is integral to increasing on-farm productivity and the competitiveness of sheep production and meeting an expected global rise in demand for red meat in coming years.”

The project is led by the South Australian Research and Development Institute (SARDI) in collaboration with The University of Adelaide.

Phase one started this year at SARDI’s Turretfield Research Centre, where a team of sheep reproductive biology experts is testing a range of the most promising dietary and biomedical compounds for increasing energy stores in foetal lambs and/or reducing the risks of damage from any oxygen deprivation during the birth process.

SARDI’s research scientists, Dr Kleemann and Dr Jen Kelly said it was the first time these products had been tested on sheep in such a comprehensive way, but many were being investigated for their benefits to human babies and pigs.

“We will be feeding a range of compounds to ewes in late pregnancy initially, and tracking physiological responses that suggest enhancement of survival and weaning rates of lambs,” Dr Kleemann said.

“Working with these groups will enable us to assess whether the products will work on commercial farms as feed additives, such as in a pellet or liquid form, for Merino and specialist maternal breeds in a wide range of environments.”

“This could reduce the incidence of stillbirths, enhance lamb thermo-regulation to help them survive cold and windy conditions outside the uterus, increase early vigour and growth and – ultimately – lift survival rates,” Dr van Wettere said.

“There may also be compounds that increase ewe colostrum production, which could boost lamb weights and improve their ability to survive the first few days after birth.”