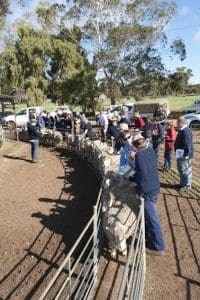 Most of the LTEM participants in WA had cropping as part of their farm programs, but many had also come from areas including around Kojonup, Broome Hill and Tambellup which were more reliant on sheep.

“But at the same time it is still important to match what is out in the paddock with the ewe’s condition and pregnancy status.”

“In years like we are having this year when there is plenty of pasture it is probably not as difficult to balance that out,” he said.

“But in previous seasons we’ve had the late breaks or dry June/July period and there is a feed deficit pretty much until spring — that’s a different situation we need to look at.”

Mr Tunbridge there are gaps in LTEM uptake in the central and northern WA wheatbelt areas, where sheep are important, but not the main source of income.

“There is probably still a reasonable number of stock out that way, but definitely the training hasn’t penetrated out that far yet.”

He would like to form new LTEM groups in the wheatbelt areas, as well as in the Great Southern and Esperance regions. Large producers with flocks of more than 20,000 sheep might also be targeted to undertake the program.

“If you can make an impact of those flocks then you are definitely going to be on the way to lifting overall flock numbers.”

The LTEM program has been updated to suit the needs of a busy mixed-farming schedule as part of the Department of Agriculture and Food’s Sheep Industry Business Innovation project.

The LTEM program has been delivered by the Victorian-based Rural Industry Skills Training to about 3000 producers managing more than 20 percent of the national ewe flock. On average, participating farmers improved the number of lambs weaned per hectare by 30pc.

LTEM is subsidised by Australian Wool Innovation and private companies, with farmers paying $865 and spending up to six days learning how to increase lamb birth weights and survival, create finer and denser wool and reduce ewe mortality rates.

The best practice ewe management program aims to increase on-farm productivity and profitability by focusing on condition scoring of ewes, pasture assessing and feed budgeting. It also focuses on getting the farmer to better understand the influence ewe nutrition has on the performance of the ewe and her offspring.

Each producer, with the help of a trainer, monitors a group of their own ewes to demonstrate the effects of nutrition and management within their own environment and follows the ewe’s reproductive year

The department is supporting the delivery of the program in WA through the Sheep Industry Business Innovation project, made possible by Royalties for Regions.

Possibly only 30pc of WA flock has reaped LTEM benefits

Mr Tunbridge said about 330 WA farmers had done the LTEM course, but with the WA flock estimated to be about 12.5 million this year, possibly only around 30pc of the state’s flock had seen the benefits of the program.

“There are plenty of opportunities out there to get this training into other areas.”

Once farmers signed onto the program they had the support of the program’s trainers, which was of huge benefit, he said.

“It is a relatively small investment of time and money for a great return as WA farmers who have adopted the program can already attest.

“Previous national participants have reported huge success – with stocking rates up by 15 per cent, weaning rate increases of around 15 per cent, plus ewe mortality down by 50 per cent on average. We can’t wait to see how well this WA-focused program performs,” Mr Tunbridge said.

Independent financial analysis from John Young, of Farming Systems Analysis WA, found benefits from participating in LTEM came mainly via two avenues: increases in efficiency due to improved understanding of the pasture-animal system; and adopting targets for the condition score profile of the ewe flock.

LTEM trainer Jonathan England said he consistently witnessed two changes from farmers in the program — a change in attitude about what needed to happen on their farm and feeling confident in knowing what they were doing was right.

“After the Lifetime Ewe program, farmers know the difference between what they are and what they should be doing,” Mr England said.

“They are aware of the implications of not responding to seasonal impacts and they know they have to do something about it and this makes them feel more in control.

“The farmers also get a lot out of the interaction of the group; it’s on-the-job education,” he said.

To become involved, farmers simply need to find other interested sheep farmers in the area to create a Lifetime Ewe Management group and contact Stephen Tunbridge on (08) 9821 3221 or email [email protected]