Emanuel still confident of shipping WA sheep, but Harmony not an option WESTERN Australian exporter Emanuel Exports is still confident it can ship 60,000 sheep held in a feedlot to the Middle East, despite negotiations breaking down with a licensed export company.

Emanuel had its export licence suspended by the Department of Agriculture and Water Resources on June 22, but is still intending to ship the sheep to the Middle East, including Qatar, using another company’s licence.

The exporter intends to ship the sheep on the Kuwait Livestock Transport and Trading-owned vessel, the Al Shuwaikh, which is anchored off Fremantle.

However, this process suffered a setback when Harmony Agriculture and Food Pty Ltd subsidiary Phoenix Exports Pty Ltd refuted recent media speculation that it will export the sheep.

A statement from Harmony said Phoenix has been in contact with the sheep importer; however, no agreement has been made or will be made that will involve Phoenix or any Harmony subsidiary exporting these sheep.

Harmony managing director Steve Meerwald said it is important for the WA sheep industry that the live export trade continues and that the care of the animals is prioritised, outcomes that are not mutually exclusive and the industry has shown are achievable.

An Emanuel spokesman said the company believed it is important to the future of Australia’s live sheep export trade that the shipment go ahead and it still confident it can find an exporter licence to export the sheep.

“Emanuel is working on a solution to move the sheep sooner rather than later,” the spokesman said.

WA’s Agriculture and Food Minister Alannah MacTiernan, Ms MacTiernan said yesterday she would visit Qatar today to meet with chilled meat importers and transporters to discuss options for more export of West Australian processed meat, particularly during the northern summer. However, Ms MacTiernan’s pre-arranged meeting with Widam Food, the Government-backed importer of Australian sheep into Qatar, has been cancelled by the company.

On the ABC’s WA Country Hour last week, Mc MacTiernan, who wants the Emanuel sheep to be processed in the state, said WA exporters had realised Middle East shipments during the northern summer months was a “high risk behaviour”.

She confirmed that Wellard and Harmony were not “in the market” to make Emanuel’s shipment and the other major live sheep exporter, Livestock Shipping Services, is not continuing northern summer shipments while it reviews its operation.

Ms MacTiernan said it was clear from reading the McCarthy Review report that it is going to difficult to export Australian sheep to the Middle East under the new heat stress assessment rule during the northern summer period.

“The logic of that just has to be accepted and that we have to work around that.” 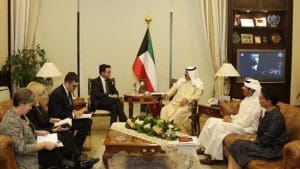 Ms MacTiernan is following in the footsteps of Australia’s Minister for Agriculture and Food Minister David Littleproud, who visited Kuwait and Qatar in mid-May to assure major importers the live sheep trade would continue. ​Before Mr Littleproud left in May he said the live export trade is part of Australia’s strong standing as a secure source of food and agribusiness investment location for a number of Middle East countries.

“We are aware of the importance of not disrupting food security in partner nations and are concerned to see that any adjustment to the live sheep trade is also managed with these important relationships in mind.”

Widam Food is part of Qatar’s sovereign food security strategy and Emanuel Exports currently has the contract to source sheep to supply to Widam, working in partnership with Kuwait Livestock Transport and Trading which delivers the sheep on its vessels the Al Shuwaikh and Al Messilah.

Qatar has emerged as the biggest market for Australian sheep, with Meat & Livestock Australia attributing the rising demand, in part, to the number of expatriate labourers working in Qatar on construction projects associated with the 2022 soccer World Cup.

The ability to replace live sheep with chilled or frozen product in Qatar is constrained by the limited space available for air freight and lack of larger scale cold-storage infrastructure in market. Many consumers still demand locally killed animals which comply with long-standing cultural and religious requirements. 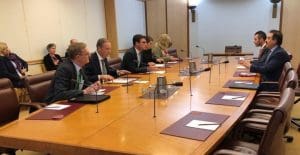 During his visit to Qatar in June, Mr Littleproud is understood to have made assurances to the Qatar Prime Minister that the live sheep trade would not be suspended.

This week Mr Littleproud said he is extremely aware of the importance of the live sheep trade to both Australia and Middle East nations.

“However, any suggestion the regulator should turn a blind eye to evidence of rule-breaking by exporters fails to understand the consequences of such a course of action.

“It is not the regulator’s fault if an exporter breaks the rules,” he said.

“I have kept the trade open despite serious pressure to ban it and where there is demand, the market will usually meet it.”

DPIRD’s immediate activities will focus on modelling feed requirements and reserves so producers are able to manage their flock to respond to alternate market and processing specifications. Further economic modelling is planned to evaluate the profitability of different sheep management options for the longer term, a media statement said. DPIRD will run workshops for producers in coming weeks to address seasonal issues including feed budgeting and sheep management.

Ms MacTiernan said around 300,000 sheep were destined for live export over the high summer months and it is vital that the state government work closely with industry to find the short and long term solutions to deal with the expected reduction in the live sheep trade.

“The Department of Primary Industries and Regional Development is taking steps to give sheep producers the tangible support they need to adjust to this new environment.

“While this will be an adjustment for industry, there are opportunities to boost local processing, creating more regional jobs for West Australians and getting more value out of our sheep meat,” she said.