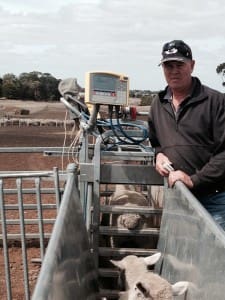 This led to him starting an “unsophisticated” trial this year on shy feeders to also test his usual no or little-fibre diet for lot feeding lambs on pellets. Details on this and a larger trial will be outlined at the group’s forum ‘Meeting the challenges of weaning and finishing lambs’ at the RIST Research Station at Hamilton on May 7.

“I expect our results will show that because of EID and micro-managing the lambs in the feedlot we can manipulate and identify the shy feeders on a regular basis and give them the ability to perform at their best,” Mr Harry said.

He said in a normal farm feedlot scenario, lot-fed lambs might be weighed going in, mid-way through the feeding period and in the lead-up to the kill date, giving a mob weight gain average.

By being able identify shy feeders, we can do something about improving their performance, he said.

“The trial is showing us that you probably have more shy feeders than you actually think you have.

“And a key point is that pre-induction and induction management is vital to getting good results.”

In the lead-up to Christmas last year, with pasture reserves low, Mr Harry fed some carry-over lambs 2-3 trail feeds of barley and then in late December drafted by eye the best 500 of more than 2000 lambs – the biggest and best-conditioned ones – for introduction to pellets in pens. All the lambs had an electronic ear tag inserted at marking.

“We put them into a pen straight onto pellets – 16 percent 12pc energy pellets – rather than putting on low quality grass hay, which is what we had available.”

They were weighed into the feedlot at about 38kg live weight (about 34-42kg range), he said. But on inspection early in the New Year he said there were lambs that didn’t look like they were doing well, were slipping in condition, and were obviously not getting onto the pellets.

“So it was a pretty poor induction straight out of the paddock after a couple of feeds of barley into the pens, with sufficient trough space.

“We asked a lot of them and it’s not probably the way you would recommend inducting lambs into a feedlot.”

On day 18 the lambs were weighed again and because every lamb’s starting weight was recorded against its electronic ear tag, the Tru-Test scales were set to draft the lambs by weight gain, Mr Harry said.

“To our surprise we had about 20pc of the pen were shy feeders that had lost weight or gained less than 100gms a day,” Mr Harry said.

“Even though it was a poor induction method there were a lot more than I thought.

“It was obvious a lot of these hadn’t worked out they could eat pellets or eat out of feeders.”

Mr Harry said there were no losses but some poor lambs and interestingly, there were lambs that looked OK, but had actually lost weight.

“It was telling us that you can’t really always tell what’s going on individually in the feedlot unless you put them over scales and you’ve got an EID for that animal.”

The 120 shy feeders were put into a separate pen with more than sufficient trough space and back onto pellets and in another five days they were reweighed and the number was reduced to about 60.

“We found that roughly half had started to gain weight – more than 100gms a day,” he said.

Some lambs need more time to settle in

Mr Harry maintained there was adequate trough space initially and throughout the trial – with 100-120 lambs per 4.8 metres of trough space — but he said the trial showed that some lambs needed more time to work out what’s is going on. But he said the quality of the induction and pre-induction period sets up the success or failure of a lot-feeding operation.

“Over the last few months we’ve been trying to monitor these things and we’re finding huge variations.”

The Southern Prime Lamb Group has now conducted a larger fully-monitored trial with Five Star Stock Feeds at Camperdown, Victoria, with two lots of 300 lambs at Mortlake. The lambs had a “reasonable” pre-induction period of five weeks on a rape crop with hay, including two weeks of pellets trailed three times a week. The trial tracked weight gains, feed consumption and conversion, shy feeders, and total costs.

On day 1 the first 300 were gate-drafted, weighed and given access to pellets in feeders and hay, and the second 300 lambs were given two rolls of hay on the first day and then pellets only.

The lambs were weighed every 10 days to monitor weight gain and track shy feeders. Mr Harry said it was found that were was a significant migration of shy feeders in and out of the main mobs.

“On day 20 we found that when we weighed the shy feeders from the pellets-only mob, we had some lambs go back into the main mob, but we also had quite a few lambs that were in the main mob have now become shy feeders.

“So we have a fairly big migration of our shy feeders in and out, with quite a big contrast between the two trial mobs in terms of shy feeders,” he said.

The hay was providing some feed for shy feeders and minimising weight loss, he said, indicating his no-hay theory was incorrect.

“But in the lambs that were gaining weight we had some terrific gains of well over 400gms a day.”

Weight gain results mid-way through the trial for the pellet-only lambs were an average 311gms a day, compared to 396gms a day for the pellet-hay lambs.

“We think that will get even better.”

The lambs will be killed on April 28 by the Australian Lamb Company at Colac. Final results will be released at the SPLG forum in Hamilton on May 7.

“I expect that we will be able to confirm that by micro-managing lambs this way that we will more lambs at a heavier weight to kill at our target end-date to justify the cost of the tag and the extra work in weighing and handling.”

South Australian-based livestock nutritionist San Jolly will play the role of ABC TV’s Q&A host Tony James at the May 7 forum, after four presentations from farmers and lot feeders, to find the best options for weaning and finishing lambs for optimum market returns.

– Doing the sums – what is the economic benefit?

– Electronic tagging – is it worth it? What’s the payback?

Registration and smoko 9am, 10am start, concludes 3pm.