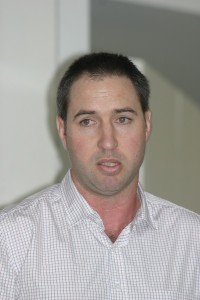 At the eNVD forum in Melbourne last week, Mr Verrall said the issue of old NVD books being used by farmers was a stock agency issue and old NVDS should not be accepted.

“You still get first edition vendor decs coming through sometimes, that’s how ridiculous it is.”

“I am agreeance with this (eNVDs), I think it has to happen,” he said.

“We’ve got the spine of it now, we’ve got all the questions to be answered, why not just make it electronic and go ahead with it?

“It’s a simple thing where everyone is going around in circles about the old excuses about not having data access – that is almost like a stalling tactic – because everyone has got a phone, everyone has connectivity somehow, so there has got to be a way of getting it through,” Mr Verrall said.

“If it is not put in as a ‘has-to-happen, everyone has to do it’ and then slowly roll it out and put a timeline on it, that it has to be done in three years, I think you will see a massive uptake along the way.”

“It is a simple thing to do and it should be put in place fairly fast,” he said.

The forum was organised by the Livestock Saleyards Association of Victoria and was attended by representatives from MLA, LPA, Safemeat, the Victorian Farmers Federation, Telstra, processors, the Australian Livestock and Property Agents Ltd, stock agents and technology companies. 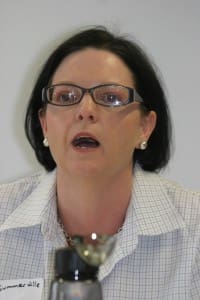 “It has to be national – state-based rules get really tricky.”

“So we are really looking forward to the partners in the room linking up with Kevin Roberts (LPA advisory committee chairman) and trying to go down that path.”

“Australia’s reputation as a supplier of quality red meat cannot ever be in jeopardy at all.”

She said agents want to make things easy for producers and for themselves.

“We really want to see that the people here doing the trials fit in with our software as best that we can.

“We want the (eNVD) system to be easy to use, cost-effective,” she said.

“We need to be mindful that there are a lot of areas in Victoria and Australia where there is no Internet and no mobile phone service.

“Sometimes Cloud-based software may not work all the time.”

She said ALPA agents were happy to get involved and help with eNVD development because it would make their jobs easier.

“It is going to be win-win for everybody.

“ALPA supports technology and we want to work with the partners in the room,” she said.

“We want to make it as easy for our members as possible, but we cannot enforce and impose.

“So we want you guys to work with us and we will work with you as well.”

Livestock administrators for Ballarat agents TB White and Sons, Joanne McGuigan and Kathy Burgess said they supported development of eNVDs because of the amount of time they spent sourcing details for incomplete paper NVDs.

“You have serial offenders who ring them up every week because they haven’t put Russia or Saudi Eligible on their dec or they haven’t filled it in properly,” Ms Burgess said.

She believed eNVDs would save agents “loads of time.”