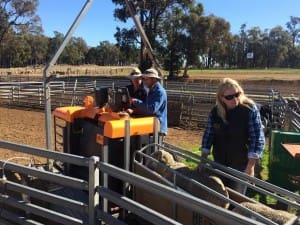 A new EID program run by independent advisory service Sheepmatters with Gallagher has helped several producer groups across WA get more out of EID in their business.

Property manager at ‘Cadogan Estates’ near Williams, James Evans, has been gradually increasing lambing percentages since he arrived four years ago and also wanted to expand ewe numbers.

Cadogan Estates runs around 33,000 stock units; it has 12,000 ewes and more than 12,000 lambs because it keeps all lambs more than a year.  Wethers are sold off to the boat or to WAMMCO for lamb. But livestock are only half the business: 3000ha is cropped for cereals that are sold as grain, plus lupins and some hay for stockfeed.

“Before we got here, lambing percentages were less than 100 percent.

“This year the maidens lambed at 112 per cent, which is our best year yet.

“It’s all working, but now we’re looking to be very precise to take it that little bit further.”

The farm manager of the 6,000-hectare property in WA’s south-eastern wheat belt, joined the EID group to begin focusing on various traits, including eye muscle and fat.

“It can be hard to match rams to the ASBV figures [Australian Sheep Breeding Values] that we want — matching sheep conformation values and quality.

“Just as a back-up, we’ve also identified a few of our best ewes on confirmation and wool, targeting breeding from a better sheep,” he said.

“We want to be able to pick our underperformers and cull them — we can do this with EID.

“The days are gone where you just grow sheep for wool, because wool doesn’t give you enough money.”

James said the goal is to maintain the sheep with the desired wool, then try to increase fertility and bring out all the other traits. The Sheepmatters EID program had proved the direction he wanted to go in.

“And the technology now is going to make that easier for us.

“With the amount of stock we’ve got here —and we’ve got a lot of stock — we want to do it the easy way, not the hard way.”

“These farmers are putting their hand up and saying ‘we need to do something, because we just can’t find the rams we want out there’.

“Studs measure performance and present the best genetics to potential clients, but they just don’t have the information against those animals when they’re selling them,” he said.

“The analogy of buying rams without data is like buying a car and not knowing its engine capacity or how much fuel it will use.”

The Sheepmatters program had an initial introduction of EID, its capabilities and benefits, with four workshops, on different participants’ farms, run throughout the year.

“We went through how commercially with EID we’re actually identifying the worst animals on performance to get them out of the system.

“This lifts the average of the mob and lowers the cost of production,” Andrew said.

James believed it would one day be compulsory to have an EID tag in sheep and everybody is going to want to know their records.

“So the sooner you start the better off you’ll be, and you’ll be years in front of everybody else.”

“This program has reconfirmed we’re doing the right thing.”