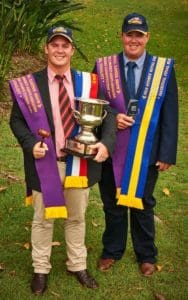 Sam has been in the industry for four years, and sells sheep and cattle weekly in Cootamundra and Wagga Wagga. He holds his stock and station agent Licence and is also an AuctionsPlus assessor.

Nick Shorten, 25, of GDL in Roma, Queensland, was the runner-up in the competition. He has been in the industry for six years and sells cattle weekly in Roma. He holds his chattel auctioneer and real estate licences and is also an AuctionsPlus assessor.

Sam will now go on to represent Australia at the International Livestock Auctioneer Competition held at the Calgary Stampede in Canada later this year. He also took home the Prosser Cup and various other prizes. 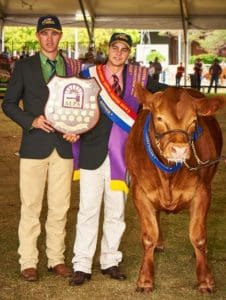 Elders Dubbo agent Tom Pollard, 19, was declared the 2018 ALPA NSW Young Auctioneers Competition winner, earning himself the John Weekes Memorial Shield and a place in the 2019 ALPA National Young Auctioneers Competition. Tom has been in the industry for two and a half years, and sells sheep, cattle and goats twice a week at the Dubbo saleyards. He holds his certificate of registration and is also an AuctionsPlus assessor.

NSW competition runner-up, Baden Chaffey, 22, of Landmark Townsend Scone, will also represent New South Wales and have a shot at the 2019 ALPA National Young Auctioneers Competition. Baden has been in the industry for five years and sells mostly cattle weekly in Scone. He holds his stock and station agent and real estate agent licences and is also an AuctionsPlus assessor for cattle and sheep.

The NAB Agribusiness Team Shield for the state competitors with the highest combined score went to NSW, represented by Sam Gemmell of Elders Cootamundra and Hamish McGeoch of Landmark Wagga Wagga.

The 10 NSW and eight national competitors each had to sell three lots. They were judged on their diction, values, voice and manner, as well as their presence and unique style, by a panel of respected and experienced auctioneers.