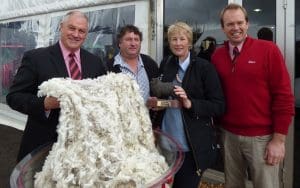 MANAGEMENT and classing – of the sheep and their wool – were the keys to a top result for the first Tasmanian winners of the Elders Southern Supreme Clip of the Year award.

The award’s 2016 winners Allan and Jenny Johnson and son Troy sell about 120-130 bales of wool from their Echo Cottage operation at Lamont in Tasmania and it was recognised as the best of about 1500 clips at Hamilton’s Sheepvention this week.

It is only the second year that Tasmanian clips have participated in the southern region award, but Echo Cottage clips have also won the Elders Tasmanian Supreme award in 2006, 2008 and 2012 and been runners-up several times.

“It immediately attracted the buyer’s attention visually and then backed it up with exceptional measurements.”

Mr Nicholls said the Lemont region produced some of the world’s best Merino wool. The October clip’s fleece wool averaged 18.1 micron, yielded 76.3 percent, with an average staple length of 89mm, a tensile strength of 46N/kt and 0.3pc vegetable matter content. The pieces tested at 17.5 microns with a yield of 71.9pc, 79mm staple length and a tensile strength of 41N/kt. The classer was Hobart-based Scott R. Zantuck and the property manager is Charles Knowles.

Former abalone diver Allan Johnson only started farming in 1997 and the Echo Cottage flock was founded in 2006 with Buangor Park ewes in lamb to Merryville’s Ringmaster 35 and Rock-Bank Bruno. Sires have since come from Merryville, Wurrook and Pemcaw. An intensive annual AI program uses predominantly Merryville sires. A ram sale is held annually in February.

Mr Johnson agreed with Hamilton-based sheep classer Denis Crawford that there was “big variation” in the Echo Cottage sheep when Mr Crawford started classing it 16 years ago.

“The wool was real crap, real yellow and tender.

“He (Mr Crawford) is the one who sorted it out, he sourced rams for me and found a stud we could buy – Buangor Park – a 100 year-old Merryville daughter stud.”

Improved sheep classing had made it easier for the wool classer on the board, Mr Johnson said.

The Johnsons have been approached to market their clip direct to an annual buyer but opted to stay with the auction system.

“Then you’ve got control of it haven’t you?” Mr Johnson said.

The Johnsons said good pasture management and good staff was the formula they worked to produce superior wool.

“Fertiliser is a big thing to keep your pastures going, making it easier for the manager.

“It comes down to the farm manager, he is one of the main keys, then Denis, the wool classer, the shedhands and the shearers,” he said.

“It all comes down to everyone really – we’ve got a good team.”

The Johnsons outlay more than $100,000 for fertiliser annually on their 5500 acres (2227 ha) and the property also runs 300 Angus breeders with some cropping for livestock feed.

But he is concerned the industry is becoming over-complicated with figures, “driving people in the wrong direction”.

“Some (sheep) classers are over-complicating it and they are only looking at the figures.”

He said flock owners need to first improve their ewes through classing, before selecting their rams to hold micron and increase wool cut.

“It’s no good buying the ram that gives you the same as your ewes.”

“Genetics and bloodlines go hand in hand – people have forgotten about bloodlines.

“People are just throwing a kitchen sink in now.”

Mr Crawford the industry in the past had gone “micron mad” to produce 15-16 micron wool and then the market changed toward 18-20 microns.

“Now what’s happened, instead of doing it slowly, people are throwing medium-fines into their superfines, it’s going to be a massive problem and it’s going to come and bite in a big way.

“I think Merino wool will survive, but I think we’ve got to go back to the fundamentals of breeding and we’ve got to put more wool on our Merinos,” he said.

“We’re taking wool off on a bigger plainer sheep and everyone is scared of good, thick loose skin.”

Mr Crawford said wool can be kept on a plain bodied sheep, but a bare breech is “a problem for all of us.”

“If you start into a real bare head and a bare breech you are taking wool off, you end up with no bellies, no locks – they pay the shearing.”