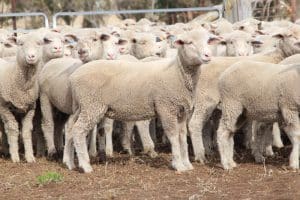 As rain, price expectations and seasonal turn-off tightens supplies to saleyards and processors, exports and domestic buyers are increasingly competing for the remaining drafts to get lambs with suitable weight and carcase finish.

Mutton prices also broke through the 500c/kg level this week, with the National Livestock Reporting Service quoting trade sheep generally averaging 400-450c/kg cwt at Wagga on Thursday and some sales touching 500-507c/kg cwt for lines with skins valued at $10-$30.

The 600c/kg trade lamb level breakthrough this week occurred three weeks earlier than in 2015, though it was short-lived, with the indicator dropping back to 599c/kg on Thursday.

Meat & Livestock Australia’s market information manager Ben Thomas said one of the main reasons for the significant and sudden lift in prices after faltering early in autumn had been the widespread rainfall in the major lamb producer regions instilling producer confidence. This may only be buoyed if the positive three month rainfall outlook comes to fruition, he said.

“However, this needs to be balanced and last year the indicator hovered the 600c/kg mark for the duration of winter, struggling to make major breakthroughs.

“There are expectations that lamb availability will tighten throughout the winter this year, but whether or not that’s enough to see the indicator to break through and stay above 600c/kg remains to be seen,” Mr Thomas said.

“There have only been rare occasions in the past when prices were above 600c/kg for an extended period, and availability in those times was much tighter than what we’re expecting this time.”

The ESDI for mutton was 3 cents down on 393c/kg and the national indicator also fell 3 cents, to 392c/kg.

At the Central Tablelands Livestock Exchange on Wednesday, the agents yarded 7400 lambs, 3850 more than last week, and 2230 sheep, 230 more.

The NLRS said lamb quality was mixed. Trade weight and store lambs were well-supplied, but heavy lambs were limited. All the usual buyers operated in a dearer market.

The NLRS said the reduced offering due to wet conditions helped lift lamb prices. There was a noticeable increase in demand for heavy export lambs following wet weather and tighter supplies at other selling centres. Trade lambs benefited from stronger bidding from all domestic processors with premiums paid for shorter skinned grain-fed lambs. Restockers were very selective due to the perennial problem of lamb cutting permanent teeth. All major export and domestic processors operated fully.

Well-finished supplementary fed trade lambs were keenly sought and there was a clear price distinction between grass-finished pens. Trade lambs generally sold unchanged to a few dollars dearer, averaging 610c/kg. Merino trade lambs attracted premium prices regardless of skin length and buyers paid from $116-$157, to average 587c/kg. Southern export processors had the greatest influence over the lighter weight categories, with lambs sold to slaughter averaging around 581c/kg. Restockers were cautious, with only a handful of pens returning-the paddock at $72-$118.

Heavy and extra heavy lamb numbers were in reasonable supply and bidding was solid, with prices firming as the sale progressed. Heavy lambs were keenly sought by several domestic processors, which helped lift prices $5 to $157-$176. Supply pressure built as the market progressed for the extra heavy pens as buyers scrambled to fill loads. The better-finished heavy pens sold at $180-$228, averaging 612c/kg.

The mixed quality sheep offering included all weights and grades. Reduced numbers and a shortage of mutton at all selling centres fuelled another price rise over all classes. Two major companies were the market drivers, with other processors unable to match the higher prices. Generally mutton averaged 400-450c/kg, with some sales touching 500-507c/kg. Medium and heavy mutton sold from $100-$180.20.

In Victoria at the Hamilton saleyards on Wednesday, the agents yarded 4614 lambs, 2587 fewer than last week.

The NLRS said the lamb offering include 2500 Merino lambs. Quality was average to good, with most of regular buyers operating.

In Western Australia at the Katanning saleyards on Wednesday, the agents yarded 5650 lambs, 365 fewer than last week, and 4000 sheep.

The NLRS said it was a mixed quality yarding of sheep and lambs at Katanning. Lamb prices eased on quality.

Grown sheep prices rose due to the limited number available. Young Merino ewes sold to processors for $60-$103, depending on weight and size, and restockers paid up to $92. Mutton was in strong demand, with light ewes in a full fleece selling from $48-$83 and heavier mutton making $78-$105. Young wethers sold for $55-$99 to processors, depending on weight and condition, with feeders paying $66-$110 and live exporters $87-$96. Older wethers sold for $68-$97 to restockers and feeders and live exporters at $89-$105.

In Queensland at the Warwick saleyards on Wednesday, the agents yarded 1013 lambs and hoggets, and 316 sheep.