The Dunkeld meeting votes to oppose dingo reintroductions in Vcitoria.

A meeting of about 160 farmers, local residents, councillors and Victorian Farmers Federation representatives at Dunkeld in south-west Victoria on Monday voted to oppose the measures outlined in the Victorian Parliament’s Environment & Planning Committee report ‘Inquiry into Ecosystem Decline in Victoria’.

The report has recommended a trial reintroduction of dingoes, the phasing out of 1080 baiting, removal of the unprotected status of dingoes and dingo-dog hybrids, the suspension of kangaroo harvesting and cessation of lethal control for pest species in the trial area.

The public meeting heard a series of speakers at the forum led by Victoria Valley farmers John, Rhonda and Nicole Crawford who have collected about 5500 signatures in two petitions opposing the report’s recommendations. 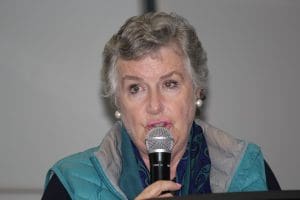 A letter from Victoria’s Minister for Agriculture Mary Anne Thomas to the Crawfords was tabled at the meeting in which she said the Department of Environment, Land, Water and Planning is co-ordinating a whole of government response to the committee report. This prompted Cr Brown to suggest that people at the meeting should write to Premier Daniel Andrews, Environment Minister Lily D’Ambrosio and Ms Thomas “putting very strongly” their opposition to the proposals.

“If they get four or five thousand letters about this issue, they would have no peace,” she said.

In her letter, Ms Thomas said there were no current proposals under consideration reintroduce dingoes to land within the Southern Grampians Shire.

“Any potential proposal to reintroduce species like dingoes first requires further discussions with farmers, land managers and traditional owners, founded on building community understanding of the cultural significance and ecological role of the dingo.” 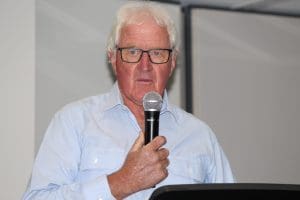 Wool grower John Crawford called for the fight against dingoes to spread across the state.

However, after the meeting John Crawford said Ms Thomas’ statements did not allay his concerns about the committee report’s recommendations. He said the priority now was to get more people and municipalities responding to the proposals.

“I’m hoping that other people will take it to other regions and councils.

“We are going to keep pushing, but we can only do so much.”

He urged the government to “knock this idea on the head.” 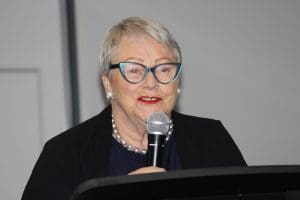 Western Victorian MP Bev McArthur – the fight must go on.

Ms McArthur said she co-authored a minority report opposing the committee report’s recommendation to reintroduce the dingo as an apex predator. However, she said the threat of the reintroduction as outlined in the report had not gone away.

“The fight will have to go on.”

“She said the impact of dingoes and dingo-hybrids is immense, it’s not only the financial impact from loss of stock, but there is also the mental anguish, the time, the worry the cost, the effort (involved) in keeping out dingoes is considerable,” she said.

“Elsewhere in Australia, tens of millions of dollars is being spent to try and keep dingoes out of where they already exist.

“The idea that we were going to introduce them here is extraordinary when elsewhere mountains of taxpayer money is being used and farmers’ money to keep them out of areas where livestock are being produced.”

She also suggested that Parks Victoria would not be able to run an effective dingo trial and “no chance” that dingoes could be stopped from escaping, breeding and attacking livestock on neighbouring farms.

A letter from the chair of the National Wild Dog Consultative Committee, Geoff Power, in South Australia outlined the costs to rebuild the state’s dog fence control incursions and the impact of predation on livestock, and the reduction in the sheep flocks in Western Australia and Queensland due to wild dogs.

“My plea is not to let Victoria face the same problems,” Mr Power’s letter said.

A letter from the co-coordinator of the Corrowong Tombong Merriangaah Byadbo Wild Dog Management Group, Robert Ingram, said Victorian and New South Wales national parks surround more than 70pc of the landholdings in the group and despite a three-fold increase in control efforts, the wild dog problem is worsening. He said the Victorian proposal would only lead to further degradation of biodiversity and the environment in the national estate with additional costs and losses to neighbouring landholders. 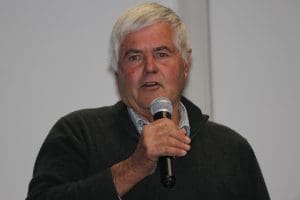 Bill Crawford – keep them out.

“Whatever we can do to keep them out, I fully support.”

Sheep producer Stuart Croft farms at Heywood and in New South Wales and said the prospect of wild dogs did not fit in with pain and stress-free livestock production. He said farmers in South Australia had also spent a lot of money on wild dog control. 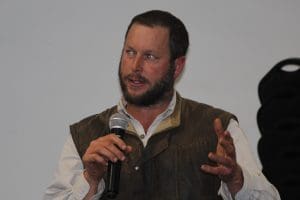 “And they’re looking out the front door at their dog fence saying isn’t that great, meanwhile the Victorian government is loading up dingoes at their back door inside the dog fence.”

VFF Livestock councillor and Wimmera farmer Graeme Maher said he believed dingoes and wild dogs would live with cats and foxes rather than control them and suggested that the Federal Government should have a position on the management of national parks.

Farmer and meeting MC Don Robertson said 1080 is an “absolute tool we must use until we get an alternative.”

Dingoes can be introduced ‘where it is appropriate’

Dunkeld resident Tamasin Ramsay, the research and policy adviser to Victorian MLC Andy Meddick, attended the meeting and supported a dingo trial “where it is appropriate.”

She said did not want lambs and sheep predated by dingoes, and understood the Crawford’s concern, but believed dingoes and wild dogs were different “in every aspect”.

She had been told by ecologists that dingoes shouldn’t be released in the Grampians unless there was a joint cultural burning program.

“The thing is they (dingoes) will go down and predate on sheep because they cannot predate in the forest because it is too thick, so it has to be done jointly with cultural burning.”

“So I’m also not saying that the answer is simple, but there is a Predator Friendly Farming Network and theirs Landholders for Dingoes, and there is a lot of instances, and admittedly this is with cattle farming, which I know is different to sheep farming — I realise sheep are more vulnerable — where they have had great success.

“There they say the predation on their sheep has actually reduced, dingoes have found their place in the landscape, there are less cats and foxes and rabbits and it’s working.”

Ms Ramsay said she would love to find common ground with farmers on the issue and “find a way to benefit all animals, including our own species.”

She also supported farmers undertaking other methods of predator control such as guard dogs, shepherding and night corralling of sheep to protect flocks rather than using 1080 baiting.

“I realise it is more work for farmers, but I suppose my view is that every industry in our world currently is having to change …. and agriculture has to change, but I would love to help do it in a positive way.”

“I’m convinced it’s possible even though I know a lot of people didn’t come to the meeting last night because they said it is just going to be a lobby meeting.”

Those who didn’t come to the meeting included Dunkeld residents, landholders and tourist operators, she said.

Ms Ramsay said 1080 is a highly toxic poison and is banned in other countries and there is no antidote. She believed after talking to dingo experts that provided the pack integrity is not affected by the removal of alpha males and females with shooting or baiting, dingoes would not attack sheep after a two-year pack stabilisation period.

“They are not interested in lamb, it’s too fatty for them, they can’t digest it, they don’t like it.

In regards to attacks by dingoes and wild dogs in other parts of the state, she has been told this was happening because the alpha pack members had been removed “because they (young dingoes) don’t know how to hunt properly.

“That’s what I understand, I’ve spoken to three dingo experts that say that – it’s when you interrupt the pack integrity.”

Ms Ramsay said she did not want to see any animals suffer. Sam and Nicole Crawford held up some graphic photographs of wild dog attacks.