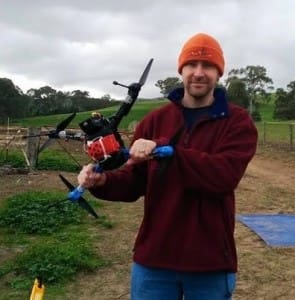 The University of Adelaide’s chief science officer Ken Clarke with a drone.

UNMANNED drones will be flying along South Australia’s dog fence this year after a boost in government funding announced today.

South Australian Minister for Agriculture, Leon Bignell, said $100,000 would go towards a trial on the use of drones to inspect dog fencing. The remaining $275,000 will be used to continue dog trapping and baiting and for the services of a Biteback coordinator.

The University of Adelaide’s Unmanned Research Aircraft Facility will be conducting the drone project and deputy director, Dr Ramesh Raja Segaran, said it would look into the effectiveness of using different commercial-grade drones and sensors to find breaches in the dog fence and to locate wild dogs.

The drones would be equipped with thermal and visual imaging equipment, he said.

No drone flight tests have been done along the dog fence, but the project is scheduled to start this year.

“We are looking to tie it up by the end of the next financial year,” Dr Raja Segaran said.

He said it was too early to ascertain the likely cost of operating drones along the dog fence, but currently CASA requires drone operators to be trained and licenced.

“One of the things we are looking into is how to get best cost-benefit out of it.”

URAF director Associate Professor Lian Pin Koh said in November the SA Dog Fence Board and other relevant agencies would be asked what their needs and current practices were to formulate a strategy to utilise the drone technology.

“Hopefully towards the end of the year, from November onwards, we will be doing some actual trials.”

Drones would need to save money and be effective

SA Dog Fence Board executive officer Michael Balharry said use of drones along the fence line would have to save money and be able to effectively check it for breaches and maintenance.

“It has got to save us money so we can put it back into the fence.”

Current legislation requires the board to check 2139-kilometre fence every 14 days.

“It doesn’t say how, but it presumes it’s a patrolman,” Mr Balharry said.

Inspection and maintenance duties along the fence are currently shared by five contractors plus subsidised private landowners at a total cost of $453,000 a year, or about $212 a kilometre/year.

Mr Joyce said prolonged drought in areas of South Australia is generating significant hardship for farmers and their communities, with pressure mounting on land and water resources.

“The last thing these people need are wild dogs and other pests further affecting their profitability and while we can’t make it rain, we can help mitigate some of the impacts of drought.”

Mr Bignell said while current programs to address drought-related pests have been well received, wild dogs remain a big issue for our farmers.

“The use of drones to inspect fences will save time, money and effort.”

Biteback is working in SA

South Australian Minister for Sustainability, Environment and Conservation, Ian Hunter, said Biteback had been a successful program, and more assistance was welcome.

“The Biteback program and professional dog trapping have been an effective response so far, but we need to do more to control the numbers of wild dogs in South Australia and the State Government will put to good use this funding from the Australian Government.”

Minister Joyce said the new funding is in addition to the $200,000 already provided to South Australia for pest management.