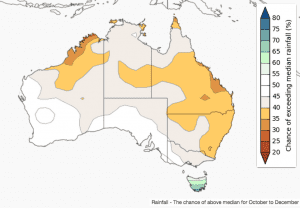 A drier than normal October to December is more likely for broad areas of eastern Australia and parts of northwestern WA, according to the Bureau of Meteorology’s latest three monthly climate outlook released this morning.

Conversely a wetter than normal outlook is more likely for most of Tasmania.

Climate influences include warmer than normal temperatures in the tropical Pacific Ocean and a neutral Indian Ocean Dipole.

Despite being warmer than average, tropical Pacific Ocean temperatures currently remain within neutral levels. POAMA, the Bureau’s seasonal outlook model, expects the tropical Pacific to warm slightly, but remain within the neutral range for the remainder of the year. Six of eight international climate models suggest a late season El Niño, or near El Niño, ENSO state is likely. The October to December rainfall outlook for the country reflects this forecast, with a weak dry signal across much of the eastern and northern parts of Australia.

The Indian Ocean Dipole (IOD) index has recently returned to neutral values after being below the −0.4 °C (the negative IOD threshold) threshold since mid-June. 2014 is now considered a negative IOD year. Model outlooks suggest neutral values of the IOD are most likely for the remainder of the year.

Warmer than normal ocean temperatures to the south of Australia are likely to be influencing the Tasmanian outlook, with cloudier conditions expected later in the outlook period.
Average to cooler than average waters to Australia’s north may be influencing drier conditions in some tropical areas, with a dry build up period likely.

Bureau climatologists continually monitor the climate for any significant developments, with information on the likelihood of El Niño/La Niña and IOD events available fortnightly at the ENSO Wrap-Up. For a summary of Pacific and Indian Ocean outlooks, please see the Climate Model Summary.