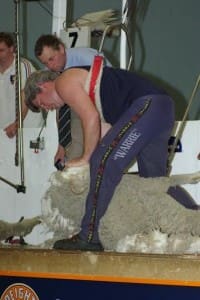 WEST Australian champion Damien Boyle has New Zealand shearers shaking in their moccasins as he zeroes in on a sixth consecutive win in New Zealand’s only fine wool shearing championship this weekend.

When Boyle won last year’s final at the New Zealand Merino Championships in Central Otago shearing capital Alexandra, it was just after an operation and a cancer scare which had him wondering whether he’d ever shear again.

But there’re no worries this year for the 37-year-old who at the weekend bagged another double at the Royal Perth Show, about 320km north west of home town Tambellup.

Bypassing the opportunity to shear for Australia in a trans Tasman test and the Australian national championships in Hamilton, Victoria, he won the Perth show’s open final for a 19th time and also figured in a West Australian state team’s Merino shearing match against New Zealand guns Nathan Stratford, of Invercargill, and Colin O’Neill, of Alexandra.

The Perth open win gave Damien, and runner-up Todd Wegner from Nungarin, their airfares over to New Zealand for the Alexandra event.

“I can’t be shearing too bad,” said Boyle, who shears using a sling for back support. “I must be fitter than I was this time last year. I’ll try to make the final, and see what happens next.”

Boyle will be one of about 180 competitors at the two-day, Friday-Saturday Alexandra event which opens the Shearing Sports New Zealand season of about 60 shows through to the start of April.

Over $14,000 in prizes is at stake, while heats of the open shearing also constitute the first of five qualifying rounds in New Zealand’s major all-breeds event, the PGG Wrightson National, incorporating the McSkimming Memorial Triple Crown.

Recent winners of the championship events