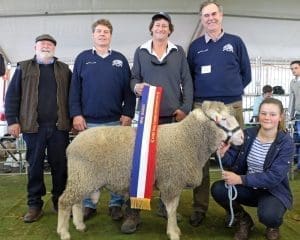 DOHNE sheep returned to the show ring after a 40-year global absence to unveil a unique judging system combining objective data and subjective assessment at the Australian Sheep and Wool Show.

Held on July 16-17 at Bendigo, the judging drew 60 rams from four states and featured a weighted index for carcass and wool traits, combined with visual assessment.

The objective system, which comprised 65 percent of the total score for each entry, was devised by sheep industry consultant Geoff Duddy, Yanco, NSW.

“Thirty five percent of the total score was from the visual assessment and conformation to make sure the rams on display were suitable for the Dohne breed,’’ he said.

“It worked well — the 70:30 weighting is where the Dohne is sitting with respect to their income from meat versus wool.’’

Mr Duddy said the judging model could be applied to other sheep breeds.

“In the future, with Merinos in particular, we may see judging not just be on a visual criteria or raw data – on the maternal side it has huge potential to incorporate objective measurement,’’ he said.

Australian Dohne Breeders Association president Richard Beggs said the combination of subjective and objective components in the show ring had not been done before.

Mr Beggs said the judging criteria would be reviewed but had been a positive exercise for the breed. He said the Dohne’s subjective and objective classifications set it apart from other dual purpose sheep breeds.

“All the breeds have some sort of a performance class where they are judged with some objectivity as well as subjectivity, and there are still a lot of classes purely subjective,’’ Mr Duddy said.

“In the Merino breed, the all-purpose classes attract about 150 entries – they could look at our system and move towards incorporating ASBVs rather than raw data in the future.

“It takes out the environmental differences and puts sheep on a level playing field, providing they have good enough linkages.’’

Macquarie stud principal John Nadin, Warren, NSW, said the twin ram was out of the stud’s most productive Majestic family.

“This is the first time Dohnes have been shown in Australia and because of the heavy emphasis on objective measurement, (showing) has always been a sticking point among breeders,’’ he said.

“The committee which got this up and running had to keep in mind the feelings of the membership so stuck to the Dohne philosophy of 70 per cent meat and 30pc wool.

“Time will tell whether we got it right but it’s unique – it will be for the membership to decide whether it is worth going ahead in the future or not,” Mr Nadin said.

“I have been coming to Bendigo for 12 years and this is the biggest crowd I’ve ever seen in the Dohne marquee.’’

In the pairs, Don and Karen Mills, Kardinia Dohnes, Corowa, NSW, exhibited the junior pair of rams and supreme pair.

The show marked the 50-year anniversary of the Dohne breed and was a stop-over for international delegates visiting Australia as part of the Global Dohne Conference and tours from July 15-29.

The junior champion ram was sponsored by Macquarie Artificial Breeders and Riverina Genetics, and the Supreme Dohne by Elders.