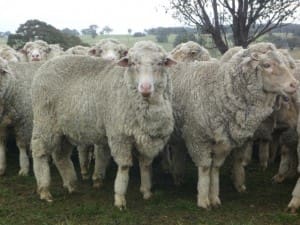 Lamb prices held firm across the categories in saleyards last Friday, with restocker and trade lambs making the biggest gains during the week.

Reflecting the strength of demand for quality trade lambs from declining yardings, the National Livestock Reporting Service’s Eastern States Indicator for trade weights closed firm on Friday at 578c/kg cwt after an 8-cent gain for the week.

The ESDI for restocker lambs gained one cent on Friday to close on 567c/kg, up 7 cents for the week.

Heavy lamb prices continued to lose ground, with the ESDI closing down two cents on Friday at 578c/kg, down 10 cents for the week. The national heavy lamb indicator finished on 579c/kg, down two cents.

Mutton prices also held firm late last week with the ESDI closing one cent up at 378c/kg, after rising 18 cents during the week. The national mutton indicator lifted two cents to 378c/kg on Friday.

Good quality heavy wethers with a big jacket out of southern NSW met fierce competition from exporters, processors and restockers on Tuesday, she said.

Ms Adams said AuctionsPlus listed 52,584 sheep and lambs last week. Aged Merino ewes continued to meet strong demand, with prices for scanned in lamb ewes ranging from $85-$126, averaging $107 with most variance based on weight of the mutton return, she said. Young ewes scanned to terminals made $90.50 to a top of $145 for three year olds out of South Australia in lamb to the Border Leicester. Young ewes joined to Merinos sold for $76-$110.

The NLRS said lamb quality was again mixed, with some good lines of grain-assisted lambs offered along with the plainer types. Most of the yarding was heavy and extra heavy weight lambs, although these did not display the weight of previous sales. The usual buyers competed in a fairly steady market.

The NLRS said quality was very good in the heavy and trade weight lambs. Mainly heavy lambs were penned, along with trade weights and a few stores. Competition was solid from all the usual buyers, particularly on the trade lambs which experienced increased demand.

Light lambs to the processors averaged $100 and store lambs averaged $85.60, up $5. Medium and heavy trade weights were firm with some sales very strong, averaging from 580-605c/kg cwt. Several pens of heavy trade weight lambs sold from $140-$150. Heavy weight lambs were firm to a couple of dollars easier and averaged from 558-588c/kg. A few pens of extra heavy weights mostly sold from $176-$186 and topped at $196 for lambs with an estimated carcass weight of 32kg.

The NLRS said quality remained very mixed, with only a scattering of well-finished lambs. A handful of regular meat buyers followed the sale.

The few pens of heavier export lambs were dearer, up to $189, although the trend was based on limited sales. The lamb yarding was dominated by pens of plainly-finished domestic lambs weighing less than 21kg cwt, with most sales from $85-$116. Odd pens of very small lambs made from $23-$65. Supplies of well-finished heavy trade lambs were limited, with a few pens at $132-$136. About four pens of extra heavy export lambs made from $180-$189. Most of the better quality slaughter lambs sold from 540-580c/kg cwt, with plainer types and mixed pens below this.

The mutton sale showed a dearer trend compared to a week ago, though based on limited and mixed sales. A line of 240 two-year-old scanned-in-lamb composite ewes, due to start lambing in July, sold from $120-$135 to local restockers. Heavy ewes sold to slaughter made from $100-$120, with light and medium weight ewes making $55-$88.