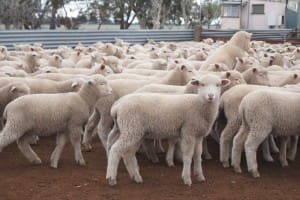 PRICES for new season lambs with weight and old lambs with finish strengthened in saleyards this week, supported by improving quality, good prices for clean, fresh skins and restocker interest in some centres.

Rates for lighter suckers are more varied from 464-700c/kg, depending on quality and level of restocker interest.

Over-the-hook rates firm in NSW and Victoria, higher in SA

In NSW, the National Livestock Reporting Service quoted over-the-hook lamb rates as firm week-on-week, with the majority of contributors making no changes to rates. The 2-4 score trade weight lamb rates are 530-600c/kg, 22kg+ lambs are 570-600c/kg and Merinos 16-22kg are at 460-540c/kg. Lamb quality continues to be low due to the cold conditions, the NLRS said.

The National Livestock Reporting Service’s Eastern States Daily Indicators for all lamb categories firmed, apart from the restocker indice which lost 26 cents to close at 537c/kg after Tuesday’s saleyard sales.

The ESDI for mutton closed up three cents to 374c/kg, and a similar rise in the national indice put it at 373c/kg.

The NLRS said overall quality was back this week, with fewer heavy weight lambs and well-finished trade weights.

Mutton quality was mixed. Heavy mutton was well-supplied and most grades sold to easing prices of $2-$8. Medium weight Merinos ranged from $74-$116 and heavy weights made to $139. Most of the better 3 and 4 score sheep ranged from 380-410c/kg cwt.

The NLRS said there were more new season young lambs and one buyer returned to the field. Overall, the quality of the lambs was fair to good and all other regular orders were in place. The market trend for young lambs was firm to dearer, with some prices increasing in line with weight increases. Well-finished old lambs also sold firm to dearer. However, improvement was only minimal. Secondary quality light weight lambs sold to a cheaper trend due to restricted demand. There was some restocker activity in the old lambs, with one order competing against trade buyers to secure better quality lambs. There was little change in the market for grown sheep.

The NLRS said lamb quality improved, with better runs of well-finished lambs. Most were heavy and extra heavy weight lambs. The usual buyers competed in a fairly steady market. There were 11,250 new season lambs penned and quality was fair with good numbers of fresh finished lambs available. Prices were firm for trade weight suckers at $124-$156. Heavy weights sold from $151-$165.

The NLRS said a solid field of export and domestic buyers operated in a dearer market than a fortnight ago, due in part to improved quality. The highlight was nearly 2500 new season lambs — mostly early drop second-cross lambs off irrigation country — which sold to $169. The supply of old season lambs remained mixed, although there was a better selection of trade weight Merinos which helped improve their prices.

The odd pens of export weight old season lambs sold to $162 and most of the better quality trade weight lambs made $126-$143. There was a wide carcase price range for old lambs due to the mixed quality. The best finished Merino lambs sold to $128.20 and the general run of lighter trade types made $76-$108.

Price trends were dearer for the sheep. Most of the ewes were heavier export weight types which sold from $102-$120. There was a limited offering of light and plain conditioned mutton.

The lead pens of new season lambs averaged $5-$7 dearer and the secondary and lighter weight old lambs, including Merinos, regained most of the previous week’s $8-$20 losses. Prices reached $185.60 for a pen of extra heavy export lambs and new season lambs sold to a top of $168. The market had a stronger floor in it this week, with most lighter and secondary lambs to slaughter making $80-$128.

Most of the Merino lambs were very plain conditioned and light weight types which sold from $45-$85, while the smallest types sold to restockers at $19-$46. One notable draft of more than 500 young Merino wether lambs sold from $55-$86.

In the old lamb yarding, extra-heavy export lambs sold to $185.60. There wasn’t a lot of weight on offer and most of the better heavy trade and export lambs sold from $134-$164, in an estimated range of 560-605c/kg depending on size and quality.

Some companies which hadn’t shown much interest in mutton in recent weeks were back operating and the market was dearer by $4-$12. The leaner grades of trade weight Merinos recorded the best price gains. One pen of extra heavy crossbred ewes sold to $137, but most sales were from $94-$122. Most of the Merino sheep were off shears and sold from $60-$90. A range of 330-400c/kg cwt covered most sales.

The NLRS said most of the regular buyers attended. Quality was very mixed, but there were opportunities to purchase several pens of better presented trade weight and heavy lambs.

The NLRS said a small field of trade and processor buyers were active and restockers only had a limited impact. Only a small number of new season lambs came forward in a mixed quality penning.

The NLRS said quality was mixed, with numerous small lots of tail-end lambs and some good lines of lambs for processors and restockers. A solid number of Merino lambs was offered. All buyers attended, but adequate supplies of lamb direct to works put two processors out of the competition. Prices for most categories of lambs lifted.

A small number of trade weight new season lambs sold to $128. Light weight store lambs to restockers made $30-$65. Light lamb suitable for feeders, air freight processors and restockers made $60-$98 and were firm overall, with the better drafts marginally dearer. Trade lambs sold from $82-$119, with some better drafts dearer by around $7, but the numerous plain drafts keeping averages close to firm. Better trade drafts made close to 550c/kg cwt, but the plainer drafts sold from 420-480c/kg. Heavy lambs sold to $127.

There were some excellent lines of ewes, but also numerous tail-end sheep lots. Competition and prices improved for most ewe mutton, wether and ram categories. Ewe prices were firm to $12 dearer, with weight and quality lifting prices. Light weight ewes remained firm at $30-$57. The 2 score medium weight drafts sold firm to processors to average $69 or 315c/kg cwt. Better conditioned ewes, including the heavy weight drafts, were $5-$12 dearer due to quality and made $75-$110, or close to 320c/kg cwt.