AUSTRALIAN wool prices are forecast to increase in 2015-16, supported by increased processor demand, a lower Australian dollar and falling production, according to ABARES. 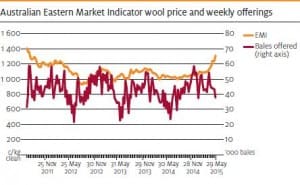 In 2015–16 Australian shorn wool production is forecast to fall by 3pc to 340,000 tonnes greasy — the lowest in more than six decades.

Mr Berry said the EMI increased by 17pc between January and May 2015, reflecting stronger export demand for raw wool across most destinations, and aided by a lower A-US dollar exchange rate.

“The increase in export demand partly reflects firmer consumer demand for clothing in the United States and some countries in the European Union, together with a refill of wool inventories in major garment manufacturing centres.

“These factors drove stronger wool buying in the first half of 2015, with most major wool producing countries recording increased export volumes and higher prices.”

Mr Berry said demand from China has been particularly strong. In the four months to April 2015, the volume of Australian raw wool exports to China lifted 7pc and their value rose 16pc.

Exports also increased by 16pc to the Czech Republic, by 40pc to Malaysia and to the Republic of Korea.

“In 2015–16 demand for wool from major processing countries is expected to remain relatively firm, reflecting improving demand for woollen apparel in some major world markets, such as in the United States and parts of the European Union,” he said. 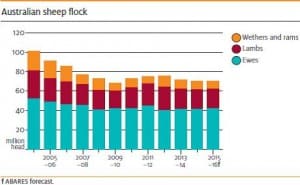 Mr Berry said high saleyard prices combined with less than favourable seasonal conditions in some sheep regions such as northern NSW, western Victoria and southern SA have led to continued high lamb and sheep slaughter in 2014–15.

“Reflecting this, the Australian sheep flock is estimated to fall by 3pc or 2.5 million head by the end of June 2015, to around 70.1 million head.

“In 2015-16 an El Niño event is assumed to result in relatively poor pasture conditions over much of the pastoral zone in the eastern states in the first half of the year,” he said.

“This is expected to hamper graziers’ ability to commence flock rebuilding and result in continued high sheep turn-off and slaughter.

“However, seasonal conditions are assumed to be more favourable in the second half of the year and producers are expected to retain breeding ewes and a slightly higher proportion of lambs in order to commence flock rebuilding.”

As a result, the sheep flock is forecast to increase marginally to around 70.5 million head by the end of 2015-16, he said. 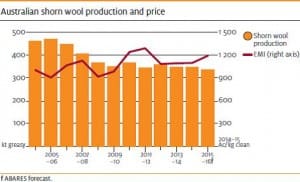 Shorn wool production is estimated to remain relatively unchanged in 2014–15 at around 350,000 tonnes. Dry conditions in some sheep producing regions, particularly northern New South Wales, western Victoria and southern South Australia, have resulted in a decline in flock numbers and a 1pc fall in the number of sheep shorn to 76.9 million head nationally.

“However, this was offset by an increase in fleece weights as a result of more favourable conditions in southern New South Wales, parts of Victoria and northern South Australia and very good seasonal conditions in Western Australia,” Mr Berry said.

Wool export values to rise in 2015–16 despite lower volumes

“Further reductions in the national flock and the number of sheep shorn are expected to drive down the volume of Australian wool exports by 2pc in 2015-16 to 418,000 tonnes greasy.

“The value of Australian wool exports is forecast to increase by 5pc in 2015–16 to around $3.1 billion, with higher export prices more than offsetting the reduction in export volume.”

Mr Berry said in the nine months to March 2015, Australian exports of wool to China increased by 3pc year-on-year. However, Chinese wool demand was stronger in the March quarter of 2015 and the volume of wool exported to China was 6pc higher than in the same period a year earlier.

“The increase in processor demand for wool may be a stronger indicator of low pipeline stocks of raw wool than of increased demand for woollen textiles and clothing.

“China’s Customs statistics for July 2014 to April 2015 show a 9pc decline year-on-year in the value of woollen woven fabric exports in US dollar terms.” 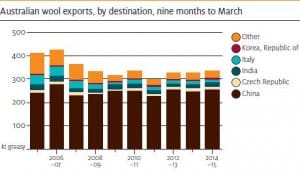 The United States is one of the largest wool consuming countries at retail and importers of wool clothing. Mr Berry said according to the US Office of Textiles and Apparel, in 2014 the US imported 223 million square metre equivalents of wool apparel, a 3pc increase from 2013.

“China was the source of more than half of US imports of wool apparel in 2014.”

“In contrast, the European Union increased its exports of woollen apparel to the United States by 5pc in the four months to April 2015.

“At a much higher unit value, demand for this higher-end luxury clothing was aided by the stronger US dollar and strengthening economy.”

In 2014, the European Union supplied 7 per cent of US wool clothing imports by volume and 22pc by value, Mr Berry said.

China is also a major consumer of woollen apparel and textiles, consuming around half of its finished production. According to China’s National Bureau of Statistics, China’s clothing retail sales (all fibres, not only wool) increased by 10pc in 2014.