She is developing a maternal ewe efficiency index for her family’s Mount Ronan White Suffolk and maternal flocks and has started her own business called Sheep Data Management, doing data collection, entry and formatting for clients. Elise has been involved with sheep data collection since age 14 on her parent’s property near York in Western Australia.

“It’s been a passion of mine and there is definitely a big demand in the industry for people who can work with data.

“I’m passionate about efficiency, profitability and productivity per hectare – all these benchmarks which underpin the profitability of commercial enterprises.”

Elise said there are definitely sheep producers who are not making the most of their flock data.

“There are huge opportunities and gains to be made if they know where to start.”

Producers should be rewarded for superior animals 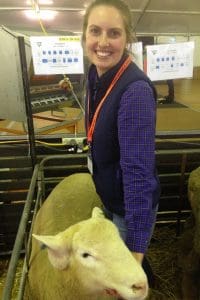 “So therefore the processors need to be collecting data to identify those animals and producers should be rewarded for investing in better genetics and providing better animals to the market.”

If abattoirs are collecting data that differentiates between superior and inferior carcases, producers should be rewarded and receive feedback so they can benchmark their product and know if their business is heading in the right direction, she said.

“This would provide a financial incentive to other producers to look at what their top performers are doing, what genetics they are using, their management system, and improve their breeding program accordingly.

“It starts on farm with the farmer making the right decisions, but those decisions can definitely be guided by the feedback from the abattoir.”

Producers should be asking abattoirs for carcase feedback and for premiums for animals that meet specifications, she said.

Fast-growing lambs can be sold earlier

Mount Ronan is looking to identify the most efficient ewes by quantifying the ability of ewes to produce their own body weight in lamb at 100 days. The stud is focussing on ewes which are more moderate in size, but still produce fast-growing lambs, and are more resilient to live weight loss during lactation and periods of feed shortage.

Elise said the industry needed sheep that were “curve-benders” that can grow very quickly up to slaughter weight after which their adult weight plateaus.

“These are the type of sheep that we want – they are not going to grow into a massive adult and therefore you don’t have a situation where you have huge adult ewes.”

“Don’t hang onto them so their weight blows out and they are too heavy for the price grid – get rid of them earlier and you will have a much more efficient system, I believe.

“An efficient ewe doesn’t cost as much to run, she doesn’t have to be a big ewe – all that matters is that her lambs are really fast-growing to the point where they are ready for slaughter.”

“That just tells me that those people don’t have the right genetics – they need early maturing genetics with a balance of growth, fat and muscle, resulting in animals that are in the right condition for slaughter once they meet that target weight.” 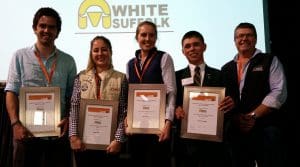