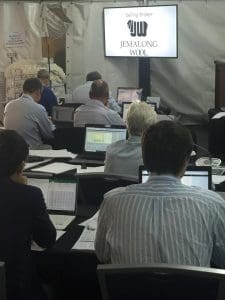 The wool sale room at the Sydney Royal Easter Show.

And ultrafine wool prices reached a new peak this season when an 11.7 micron 1PP bale from Hillcreston-Pine Hill at Bigga, New South Wales, was passed in at 25,000c/kg greasy at auction on Wednesday – the highest bid at auction since 2015, according to AWEX.

The 92 kg bale later sold after the auction for 41,000c/kg to a Schneider Group client.

“Prices across the entire Merino spectrum were affected, resulting in general reductions of 20 to 30 cents for the week.

“The only exception a very limited quantity of 22 micron and coarser which managed small increases,” he said.

“Although all types and descriptions lost ground, it was again wools possessing high mid-breaks that suffered the greatest reductions, as buyers continually increased the discounts on these lots.

Mr Plunkett said the skirting market performed slightly better than the fleece, with prices generally reduced by 10 to 20 cents.

“Wools with less than 3pc vegetable matter and those with excellent length and strength resulted least affected.”

Mr Plunkett said crossbred wool managed another week of increases, with all types and descriptions adding 10 to 20 cents.

“Locks, stains and crutchings generally sold at levels 10 to 30 cents above those achieved at the previous sale, resulting in the three carding indicators adding an average of 24 cents.”

AWI said with US currency going in favour of overseas buyers by 0.65pc it was less than ideal to see the USD EMI slip by 1pc.

“Many trade participants thoughts were the $US price reduction was more reflective of the harder to place wool types on offer, rather than an overseas demand issue in play, as most types being sought or sold forward were types not that readily available.”

Apart from the Hilcreston-Pine Hill 1PP bale, in the ultrafine fleece sector, a few lots of traditional wool types of sub-15 micron were sold at levels around an impressive 600c/kg better than the last offerings of these types.

“For the best top making and spinners’ wool in the 16 to 18 micron area, price gains ranging from 15 to 45c/kg clean were achieved, but once again volumes of these wools are extremely low and are expected to remain in short supply until the new shearing in the spring time.”

AWI said in the general superfine (16.6 to 18.5 micron) and fine (18.6 to 20.5 micron) Merino segments, nearly all of the losses in fleece types can be attributed to wools that were high cvh (co-efficient of variation hauteur – with hauteur being the average length of fibre in top after the wool has been combed), high pobM (position of break in the middle of the staple) tests or wool sale lots containing more than 1pc vm.

“The higher the VM reading the worse the losses extended and this is due to the lack of wools testing in the 0.1 to 0.9pc vm range to enable an average of 1pc vm, which is the standard of most Chinese manufacturers, as their most top quality and highest volume of type purchased.

Wool auctions cease nationally for the annual Easter recess next week and resume the following week, with the forecast offering currently at 48,809 bales.