Cowboy humour is US sheep rancher’s stock in trade 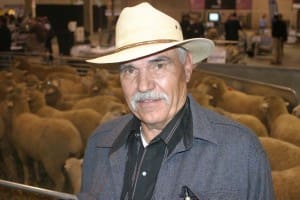 Hank Vogler at Lambex 2014 in Adelaide.

Nevada rancher Hank Vogler is serious about loving Australian lamb and wanting some of our Merinos.

But wry cowboy humour is also this sheep rancher’s stock-in-trade.

On his first trip to Australia at 65 years of age, he joked he had only been to town twice and all he and his siblings had to play with as kids was their sense of humour.

He started his sheep flock with a few animals given to him as payment for a bum cheque a cowboy gave him in a poker game. His first two broken-mouthed cows were bought with his $300 a month wages as a cowboy on a ranch job in eastern Oregon, taken after he graduated from the University of Nevada in 1971.

But he grew the flock to 10,000 in 40 years, started the Need More Sheep Company, and runs the sheep with 1000 beef breeders on a ranch in cattle country in North Spring Valley, north of Ely, in eastern Nevada.

It was mostly good humoured banter from the well-known advocate for sheep ranching in the United States, who came to Australia as the sidekick of Nebraskan rancher and agvocate Trent Loos, in Adelaide for the recent Lambex conference.

Both are hosts on Mr Loos’ radio show Rural Route; that aims to bridge rural and urban America.

Mr Vogler is known for sharing his love for ranching through funny stories, but he has a serious side and recently has been fighting plans to divert water from Nevada ranches to the state’s largest city Las Vegas.

One thing he was serious about during his first trip to Australia was his opinion of the South Australian Merinos on display at the conference.

He was fascinated by the “fabulous sheep, and fabulous genetics” he saw.

“I run Merino-Rambouillet cross ewes and just to see this much variety and this many animals and the indexes that you have on these sheep, it is just fabulous.

“I’m going to see if I can put several of these in my carry-on luggage and maybe take them home with me.”

The Merino blood in his flock comes from limited Australian semen imports, but Mr Vogler said he was interested in importing more.

He liked the uniformity, wool fineness and density of the sheep on display at the Adelaide showgrounds.

“I got a pocket full of information that I plan to take home and soon as I can make a few phone calls I will do my very best to get some of these genetics – yes sir.

“I’m not going to drop this, somehow I’m going to get this blood into my flock – they are the best I’ve ever seen.”

During his trip to Australia and Lambex also helped judge the lamb racks in the Best Lamb in Australia competition.

“Whoever doesn’t win the lamb contest can blame the damn yank.”

“But a lot of the country is nothing more than an impediment …. There is dense brush and desert that goes on for miles.”

The sheep have to contend with coyotes, mountain lions, eagles “and a government that doesn’t help us”.

Mr Vogler said there was once one million sheep in Nevada.

“So yeah, I’m surrounded by cowboys,” he said.

“I found out that you can own 10,000 cows and nobody will call you a cowboy, but you own one sheep and everybody will you a sheepherder.

“Sheep are like the crabs – you only have them for one day and then they’ve got you.”

But a serious Mr Vogler said complacency was a big problem in the American sheep industry and he welcomed Australian lamb imports.

“If it wasn’t for Australian and New Zealand lamb coming in, we would lose our counter space in the meat market.

“Because our lamb is so seasonal, I would be selling them like Christmas trees out of the back of a pick-up because we do not have a product to put in that market 365 days of the year,” he said.

“So without the imported lamb, nobody would ever have it in front of them even though most people in America have not experienced lamb.

“And that is mostly because with our tax structure and everything that is going on the husband and the wife are working, so it is either Chinese food or hamburgers or something they bring in.

“Nobody in America has time to cook and the joke is, if you want to hide something from an American housewife put it in the oven, she will never look there.”