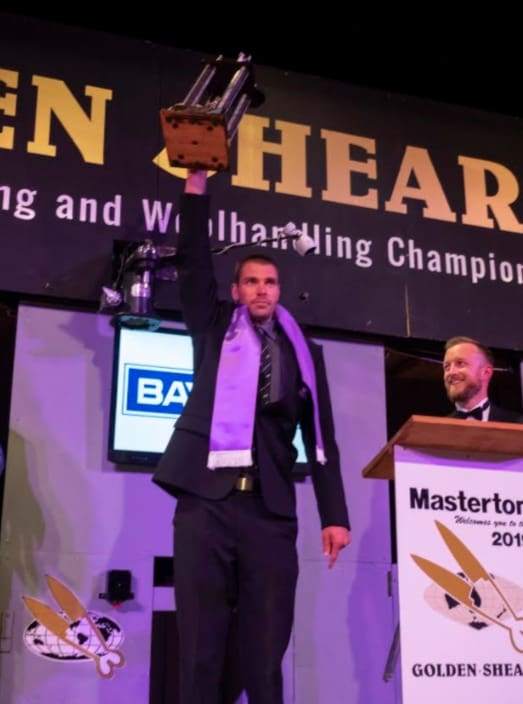 Defending Golden Shears shearing champion Rowland Smith had been expected to compete in Masterton this week for his eighth title. Image – Pete Nikolaison

NEW Zealand’s prestigious Golden Shears shearing and wool handling event has been cancelled for the first time in its 60-year history after COVID-19 restrictions escalated in the country.

The 61st Golden Shears was scheduled to be held in Masterton this week, but was cancelled at the weekend at an emergency meeting on Sunday morning.

The decision followed the overnight of  announcement of a return to COVID-19 Alert Level 2 across most of the country and the escalation to Level 3 in Auckland. Golden Shears said competitor entry fees and tickets would be refunded.

The cancellation means that within a few hours two of the biggest events in New Zealand’s Wairarapa region each year had been called off, with the last day of the Wings Over Wairarapa air show also abandoned.

Australian shearers and wool handlers usually compete at the Golden Shears in the popular trans-Tasman tests, but would have been absent from this year’s event due to COVID-19 travel restrictions.

Golden Shears International Shearing Championships Society president Sam Saunders had said last week his committee had discussed the COVID-19 situation over many months and the view had been that the championships could not go-ahead under Level 2 restrictions.

Sunday’s decision also considered the impact of a sudden return to Level 1, but the decision had to be taken also to minimise financial risk and loss to the organisation, suppliers, competitors and supporters. The Golden Shears has an annual budget of about $250,000, but had already taken steps to reduce costs this year.

Events at Taumarunui and northern Manawatu locality Apiti were held on Friday and Saturday respectively, but the Pahiatua Shears which were due to be held today were cancelled late on Saturday night.

Many of the competitors are already in the region, from as far as Northland and Southland, and including some from overseas, mainly Wales, who have arrived since late December as critical workers under the confines of the Covid-19 managed quarantine isolation provisions.

Shearing Sports New Zealand chairman Sir David Fagan appreciated the need to cancel and agreed there would have been few if any options once the latest Covid-19 situation was announced on Sunday.

He described the Golden Shears as “the Olympics”, where every competitor will have based their season around getting to the first weekend of March in Masterton.

“Everyone wants to get to the Golden Shears,” he said.

Samuels won recently at Aria and Stratford on Saturday, the first open final wins on crossbred or strong wools by South Island shearers in the North Island in over a decade. Stratford and Moore had both won the national circuit final in Masterton on a combination of sheep types, including long strong wool, fine wool, lambs and second-shear.

Last year the celebration of 60 years of Golden Shears took place amid rapidly-growing fears of the arrival of COVID-19 in New Zealand, and the 2019-2020 season survived just one more week before the lockdown was imposed later in the month.

Golden Shears entries peaked at about 580 shearers around the second world championships in 1980, when sheep numbers were nearing the 1982 peak of 70 million.

With the ovine population now hovering around 27 million, competitor numbers have declined over the years, but the 300-plus shearers, wool handlers, and pressers each year helped the championships retain the image of being the holy grail of shearing sports worldwide.