Courtney and 33 other rural leaders step up 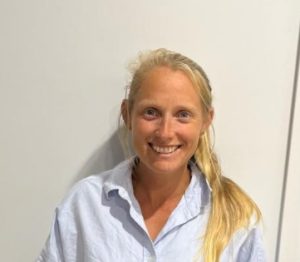 MIXED farmer Courtney Mraz has a lot on her plate, but she has still stepped up to help women in agriculture by joining the Australian Rural Leadership Program.

Courtney has been selected among the program’s 29th cohort and persevered after being nominated because of how she saw women treated in agriculture and to improve the culture for her three daughters and others.

There livestock assets include 2000 beef breeders with the capacity to run up to 5000 head, 3000 Merino ewes, 4000 first cross ewes and about 15,000 Merino wethers. They trade lambs and also manage 4500 acres of cropping. Courtney’s sponsor was the Grains Research and Development Corporation.

Courtney has been a board member on the East Gippsland and West Gippsland catchment management authorities. She was deputy chair of the WGCMA and is now deputy chair of the EGCMA. She has held other board roles in agriculture and community organisations, regarding herself as very passionate about developing a sustainable agriculture and farming system that combats climate change and sustains longevity of farmers.

Courtney recognises that she is in a male-dominated industry, but is concerned at the ‘boys club’ behaviour of some men.

“I’ve worked with men and they’re amazing and have helped me get where I am.

“But it can be a really toxic environment and I am really fortunate to have so many great male counterparts that I can call on for anything.”

However, after seeing a young woman leave agriculture after suffering discriminatory remarks from men, Courtney felt she needed to build her leadership skillset to offer advice and become a mentor.

“I was like, if I don’t put my hand up to do something about this – I’ve got three young girls – I felt it would be pretty poor on my behalf if I didn’t set an example.”

The couple has employed up to 40 people as shearing contractors before selling the run last year, and Courtney said 74 percent would under 21 years of age. The farming operation employs 15 full time and casual employees.

“We incorporate a lot of young people into what we do and hopefully create an opportunity for them in agriculture in the future – it’s something that is not sold very strongly either.”

Courtney said she wanted to be able to present tools to young women in agriculture to build their networks and deal with the issues they come across.

“You don’t have to deal with it alone; it’s not acceptable and it’s not OK.”

Courtney said she is also into encouraging sustainable agriculture and the family is looking at developing a renewable energy solar farm to diversify its income sources.

“We were hit pretty hard by the drought and I think it is the way of the future.”

The line-up includes a social entrepreneur from Deeragun in Queensland, an executive director from the food and fibre sector in Western Australia, an Aboriginal Medical Services chief operations officer from the Northern Territory, a beef cattle grazier from Queensland and New South Wales beef cattle station manager.

The ARLP is Australia’s longest and most in-depth experiential leadership development program giving participants a valuable opportunity to grow their leadership and create a network of change-makers to positively influence their organisations, industries, and communities across rural, regional and remote Australia. Participants engage in a range of experiential learning opportunities in four sessions over 15 months.

“For almost 30 years, the ARLF has remained committed to ensuring the delivery of high-quality programs that support improved leadership.

“An adaptive, network leadership approach is more important than ever as rural, regional and remote Australia faces unprecedented change,” he said.

A subsequent announcement will be made to announce a second round of successful applicants who will also join this cohort.

The Australian Rural Leaders Program Cohort 29 and their sponsors are:

Expressions of interest for ARLP Course 30 can be submitted on the ARLF website.