Composite and terminal sires in demand as wool prices flounder

COMPOSITE and terminal sires could be in hot demand this spring as Merino producers consider turning their backs on fibre production.

A horror 12 months for the wool industry where the benchmark Eastern Market Indicator fell from 1715c/kg to 1110c/kg (or 35 percent) has wool growers crunching the numbers on what they can do to be profitable. 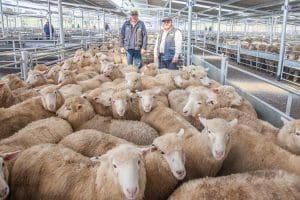 “When I do gross margins, composite sheep are top, then goats, then Merinos and then cattle,” Mr Dunlop said.

“There have been only two years in the past 20 years that I have done GM analysis where cattle returns have topped Merinos, and the cattle returns this year are creeping up on wool sheep.”

Fertility is one area where Merino breeders could make gains as well as weaning percentages if commercial producers wanted to stick with the breed.

“Fertility is an unexploited part of a Merino enterprise, where the national average is 75pc lambs to ewes joined, and in Queensland over the past couple of years, it is more like 50-60pc,” Mr Dunlop said.

“There is money in selling excess sheep (as lamb or mutton) as well as wool, and Merino breeders need to face that wool is a minor source of their income.

“Wool growers are staying in their stereotype and need to understand that wool will not be their saviour,” he said.

“They are sheep producers, not wool growers.”

Mr Dunlop said wool ceased to be the main source of income for Merino producers “back in the 1980s”, exceeded even then by account sheep sales.

In a newsletter send to clients earlier this week, Mr Dunlop said friends of his who owned one of the best-selling Merino genetics businesses in Queensland were already struggling to find buyers for their rams.

“Would you advise a friend to go into Merinos?” he said.

“I was at the Forbes, NSW, saleyards earlier this week and heard some chatter about what people would do given the wool market is tough,” Mr Roberts said.

“We are expecting some extra demand from Merino producers who will join at least some of their ewes to terminals.

“Two years ago, we noticed that there were a lot more Merino-Merino joinings as people wanted to build up numbers and there was confidence in the wool market.

“But given the wool market is not looking as good, using a Poll Dorset or other terminal over a Merino is a good option if producers want to put something (money) in their back pocket.”

Ms Roberts is in the unique position of farming family business which operates the Ridgehaven Poll Dorset stud at Cudal, NSW, as well as a commercial Merino operation near Forbes, NSW.

She said even within their own operation, they would be joining a greater proportion of their Merino ewes to Poll Dorsets this year.

“You need to have some resilience if you are a Merino breeder,” Ms Roberts said.

“Merinos can be a great money maker but sometimes they can be an expensive hobby.”

Analysis of Poll Dorset ram sales by the Association last year showed fewer rams sold, which they believed was due to shrinking ewe numbers.

While ewe numbers have not jumped dramatically in the past 12 months, Ms Roberts said the extra competition from Merino breeders wanting terminal sires had Poll Dorset ram breeders feeling optimistic about the coming spring sales.

And while her loyalties are with Poll Dorests, Ms Roberts said some Merino producers might consider using a Border Leicester ram over their ewes to produce first cross ewes, which could either be retained in their own system or sold.

Sheep breeder Tom Bull runs the Lambpro maternal and terminal seedstock flocks at Holbrook, NSW, and said it was too early to determine if his business would pick up Merino clients frustrated by poor wool returns.

“I still think Merino sales will go well, and a lot of people will stick to their guns,” Mr Bull said.

“I am not sensing panic yet (from Merino producers), but certainly there could be some small swings to composites or terminals.”

Mr Bull, who sells about 2500 rams a year, said he was picking up a “sense of unease” about wool growing, but this had not translated into business for him yet.

“We sense a bit of movement towards using terminal sires over Merinos, but we’ve seen wool growers jump in and out before,” he said.

“What level they will operate on remains to be seen but we think it will be a pretty good year to sell terminal sires.”