AUSTRALIAN lamb and sheep prices have been hit by COVID-19 impacts and abattoir maintenance shutdowns in recent weeks, but stock agents have welcomed the resumption of Warrnambool processor Midfield after its voluntary closure earlier this week.

The result of COVID-19 depressing export demand for export lambs, an increased national saleyard offering last week and forced abattoir closures due to infections have combined with regular maintenance shutdowns to drop lamb prices by up to $20-$30 and mutton values by ??? at some markets.

Although it is seasonally a low supply period, some producers kept lambs out of some saleyards this week, while concern about future pricing has led to processors attracting more direct consignments and subsequently releasing reduced grid prices. 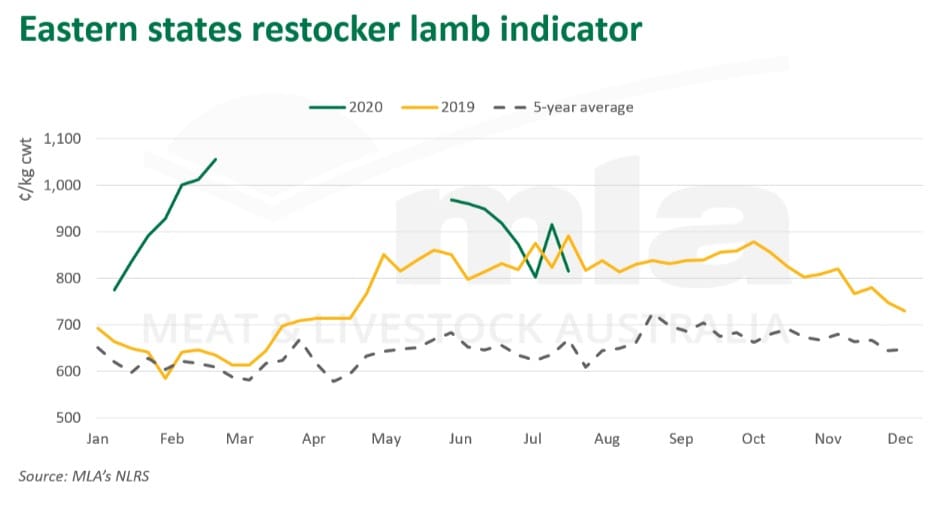 On Thursday, MLA said the indicator drops were due to a contraction in processor competition with four processing plants not operating and the latest COVID-19 developments in Victoria disrupting southern lamb markets.

Plants closed due to COVID-19 outbreaks include JBS Australia plant at Brooklyn and the Australian Lamb Company, which contract kills for major supermarket Coles. Midfield did not operate for three days until Thursday this week while staff were tested for COVID-19, with no infections found. Other companies reduced their saleyard buying due to sufficient direct supply.

MLA said due to the low availability of lambs in the market, additional processing facilities have been able to offset the impact of plant closures, mitigating any backlog.

“This is hugely required at the moment with so many other out, that’s why we have seen the lamb job tip over in the last two weeks,” he said.

Last week, there were five major competitors out of the Ballarat market, due to either COVID-19 impacts, maintenance, sufficient direct supply or financial issues. This led to the market losing all of the gains of the previous week, Mr McConachy said.

“There was a $10 a head loss on the heavies, a $20-$30 loss on trades and light trades remained firm because there were a few punters back in the market on the bottom end — $20-$30 on trade lambs was pretty tough going.”

MLA’s National Livestock Reporting Service said competition was the issue at the Bendigo saleyards, with the buying ranks impacted by coronavirus outbreaks at some Victorian meatworks and winter slowdowns at others. There was no supermarket activity, and at least four other companies didn’t operate or bought very little, the NLRS said. Many lambs sold $20 to $30/head cheaper, with the weaker trend sweeping through all breeds and weights, and agents passed a few pens in.

Mr McConachy said some producers were thinking about escalating the turn-off of their remaining lambs when Midfield closed earlier this week, but he hoped the company’s resumption might “turn the job around.”

“We are just sitting back now and seeing how it happens.

“If it shows positive signs then you will see the market population increase again, otherwise they will all go in over the hooks and the lamb operation will shut down overnight and we will hand tight for the sucker season to start.”

“Everyone else has got their certain criteria and certain lambs they are trying to buy, but Midfield can bloody near buy anything, sheep or export lambs – they are just the strength on almost everything and they would have really had a major impact on our job if they were to pull out.”

Southern Grampians director Heath Templeton at Hamilton  said Midfield and the Australian Lamb Company have a massive impact on competition in saleyards.

“All competition is important, but they are some of the bigger players.

“It is vital that these guys are look after by the government and given any resource they need to keep operating,” he said.

“They are dead-set vital for the sheep and lamb job.

“Even more so, once the sucker season gets going, if the airfreight lamb were not operational… that is vital.”

He said Midfield has one of the biggest light lamb orders in the market.

Mr Templeton said competition was good in Hamilton on Wednesday last week, but this week the NLRS said not all regular buyers attended or were active for the yarding of 502 lambs, 3413 fewer.

“But they are here and they make their presence felt, they were back here yesterday buying, so he was keeping the blokes honest on the job.”

As well as the impact of COVID-19 on JBS and ALC buying, Mr Schiller said the major influence in the drop in prices at Wagga saleyards yesterday, for a yarding of 22,000 lambs (down 8500), was the difficulty exports were having shifting heavy lambs.

“Those blokes have got a lot of meat on boats and on wharves, in boxes sitting around, that they can’t move.

“That’s taken the demand out of the top end of that (heavy lamb) job pretty well.”

Mr Schiller said the market was coming back from “big highs”, but on a dollars per head basis, prices were not disastrous.

“We are still getting $190 for the better end of the suckers, it is just the big heavy (old lamb) job where they are struggling to get over $200/head that is taking the hit, whereas normally this time of the year they are kicking goals.”

LMB Linke auctioneer at Hamilton Bernie Grant believed that the downturn in lamb prices might be short-lived due to the lack of available lambs, despite recent good yardings at New South Wales saleyard centres like Wagga Wagga.

“I think we will see a slight rebound back in prices.

National lamb yarding up 22pc in week to 17 July

Despite the uptick in weekly yardings, numbers are still relatively subdued, which is not uncommon for this time of year as processors often take the opportunity to initiate maintenance work during the slowdown period, MLA said.

MLA said in recent weeks have seen a shift in supply availability in the lamb market, as a relative increase in supply has resulted in prices falling from record highs earlier in the year. The temporary shutdown of multiple processing facilities in Victoria  and in New South Wales has resulted in competition in the southern store market falling away, pulling prices down across all categories. Additionally, the subdued overseas demand for lamb has seen export buyers not participate in the bidding, adding further downward pressure.