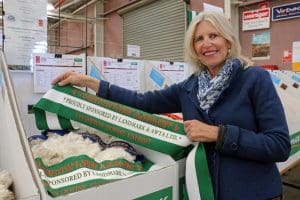 A COMMERCIAL fleece from an October-shorn flock ewe has won the overall champion Dohne award at the Australian Fleece Competition at Bendigo.

The fleece came from first-time entrants, Caroonboon Station, Wanganella, NSW, owned by the Pye family, and was sashed as the champion Dohne stud ewe or wether fleece.

The Caroonboon Station wool also proved a winner in the woolcraft competition where a garment made from a station fleece won the home-knitted category.

The fleece competition, held at the Australian Sheep and Wool Show on July 15-17, drew more than 40 Dohne entries from two states.

The winning 22 micron fleece had a greasy fleece weight of 6.4kg, clean fleece weight of 5.1kg, yield of 80.4 percent, staple length of 123mm and staple strength of 45 Newtons/kilotex. It had a CVD of 17.3 per cent, comfort factor of 98.4 per cent and vegetable matter of 1pc.

The overall winning fleece was from the Pye family’s 12,000-ewe commercial flock on Caroonboon Station and it also won the supreme fleece at the Wagga Wagga Show.

Caroonboon Station will offer 5000 commercial Dohne ewe lambs for sale in the spring.

“We breed Dohnes for their fertility, do-ability and their wool – we were a Merino stud and changed to Dohne for increased fertility, carcass and feed conversion,’’ Mrs Pye said.

The family had entered two fleeces from Wanganella and five from their Uardry-Calga studs at Coonamble, NSW, the final selections made by Kym Hannaford, Landmark, Wagga. The winning fleece will be displayed at the Southern Wool Selling Centre at Brooklyn.

Mrs Pye said the inaugural show classes for the Dohne would increase the profile of the breed.

“I hope they receive enough positive feedback so it will be done again next year,’’ she said.

Mrs Oakes said it was the first garment spun from Dohne wool to be entered for the woolcraft awards.

“It was a white sleeveless cardigan knitted on a yoke, hanging with a long skirt on the side and back,’’ she said.