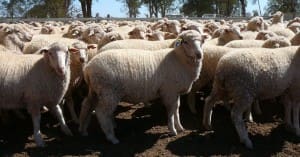 This line of 710 unshorn September-drop Coolalee-Merino cross lambs, 16.8kg cwt and mostly score 2, sold for $93 at Mungindi, NSW, on AuctionsPlus this week.

COLES’ forward lamb contracts for May at Gundagai and Brooklyn have filled less than a month after their release.

The contract for 18-25kg cwt lambs is 560c/kg at the Gundagai Meat Processors plant and 580c/kg at the JBS Australia Brooklyn plant, with the usual upside clause in relation to Coles’ weekly spot grid price.

Contracted deliveries are due to start on May 2 and run into the week starting May 23 at both plants.

Coles national livestock manager Dale Pemberton said it had been hard to source lambs of the right weight.

“There has been plenty of quality about, the conditioning of the lambs has been very good.

“People are more professional, the genetics have certainly improved and they understand more how to condition a lamb for slaughter,” he said.

“One of the things that’s probably challenging us a little bit is that the national slaughter weight continues to increase, it’s increasing dramatically.

“That’s making it quite challenging from the domestic point of view, when 45 percent of the lambs are required for domestic consumption,” Mr Pemberton said.

Mr Pemberton said the company had worked hard developing areas to provide the right lambs and were now less reliant on individual suppliers. But there were quality expectations for contracted lambs with inspections prior to delivery.

Restockers were less active at Hamilton in Victoria, but steady at Horsham and Wagga’s lighter lambs sold to more buyers from Finley, Bendigo, Echuca, Forbes and locally.

The ESDI and national mutton indicators finished on 315c/kg, down 3 cents.

In New South Wales at the Central Tablelands Livestock Exchange at Carcoar, the agents yarded 12,000 lambs, 700 fewer than last week, and 6150 sheep, 1950 more.

The NLRS said lamb quality was mixed. The heavy and the better trade lambs were in good condition while the remainder tended to lack finish. Mainly trade weights were penned and there more heavy lambs. Stores were well-supplied.

All the usual buyers operated and competition was good, resulting in a firm to dearer market. Light lambs sold to processors at dearer levels, averaging around $93. Restocking lambs sold from $77-$108. Medium and heavy trade weight lambs were $6 dearer and mostly sold from 500-510c/kg cwt. Most of the better heavy trade weights made $115-$120. Heavy weight lambs were firm to slightly dearer at mostly 490-500c/kg. A pen of extra heavy lambs made $156 with an estimated carcase weight of 28kg.

The NLRS said it was a very mixed quality yarding. There were more inferior light weight lambs being offloaded due to the dry seasonal conditions. Grain-fed and lambs finished on lucerne attracted the best competition, while plainer longer-wool lambs were overlooked by several domestic processors. Not all buyers operated fully, with major domestic processors extremely selective.

There were more heavy and extra heavy lambs with plenty of weight and yield, with good numbers over 30kg cwt. Heavy lambs sold unchanged to average 495c/kg. Extra heavy lambs sold to solid competition, with prices firming as the sale progressed. They made $150-$180, or around 477-495c/kg.

Most of the usual buyers attended, but not all operated, and prices for ideal slaughter lambs remained firm. Less well-covered medium trade lambs sold $2-$4 easier. Light lambs were most affected, selling $8-$10 cheaper, and store lines fell by up to $14.

The sheep offering had some good lines of heavy weight crossbred ewes and average to poor condition 2 and 1 scores, with only a limited number of Merino wethers. Prices fluctuated, with some light and medium crossbred ewes selling firm, but overall light and medium mutton was $5-& cheaper. Heavy weights were $10-$12 cheaper. The light 1-2 scores sold from $29-$61, medium mutton made $60-$83, to average around 310c/kg. Heavy 3-5 scores made $78-$93, to average 265c/kg. The best of the limited penning of Merino wethers made $66-$81 and averaged around 315c/kg. Hoggets sold to $105 and the better rams made $53-$84.

The NLRS said most of the regular buyers operated and lambs were generally $2-$4 dearer. Quality was average, but there were reasonable numbers of better presented trade weight and heavy lambs.

At the Ouyen Livestock Exchange on Thursday, the agents yarded 7920 lambs and 563 sheep.

Prices for quality well-finished lambs were quoted as firm to $5 dearer.

The NLRS said all categories of the mixed quality sheep sold firm except young Merino ewes and wethers which were up $5-$10 due to grazier demand.

In Queensland at the Warwick saleyards on Wednesday, the agents yarded 2460 lambs and hoggets, and 520 sheep.

The lamb market was firm for most descriptions. Trade and export lambs were well-represented in the larger yarding.

The NLRS said it was another good line-up of heavy lambs and a wide range of light lambs. With most major export works reporting an over-supply it was not surprising that the market was much easier.