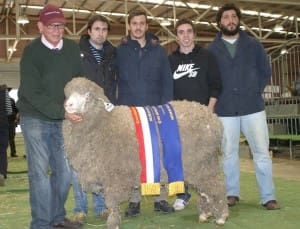 NEW South Wales Merino stud Coddington Uardry Poll has sold a ewe for a new Australian record price of $14,000 as part of a buying spree by an Argentinian stud at the Australian Sheep and Wool Show in Bendigo.

The stud claimed it has also paid $15,000 for another ewe, but Sheep Central has not been able to confirm this with the breeder.

Spokesman for the Indalo stud Emiliano Lopez said the stud’s owner had bought one ewe for $15,000 and $14,000 for a Coddington-Uardry Merino ewe, among eight purchased, and negotiations were continuing with other breeders.

On the last of three days of stud Merino sheep judging, representatives of the Indalo stud made offers on several championship winners. As the Merino championship judging finished and show sheep were loaded prior to the ram sale today, the Indalo buying team made offers for top show ewes with leading studs. The team members lined up for photographs with Coddington Uardry, Roseville Park, Nerstane and Wurrook stud principals with their ewes.

The Argentinian stud is sourcing ewes either sired by or related to the influential ram, Roseville Park sire 09-0014, which was also the sire of the record-priced $12,000 ewe at the One Oak stud dispersal last year. Breeders are using the One Oak ewe price to set a new benchmark for selected stud ewe prices. The Indalo stud also bought sheep from Roseville Park, North Ashrose and The Fringe last year, but reportedly for prices under $10,000.

Coddington Uardry Poll principals Graham and Susan Coddington confirmed the Argentinians had bought their grand champion medium wool Merino ewe at Bendigo for $14,000; a price they believed was an Australian record for a Merino ewe. The Coddingtons are based at Yeoval in central west NSW.

Mr Coddington said the rising two-year-old poll 18.7 micron ewe was by Wallaloo Park Real Deal out of CP 11-5422, who was by RP09-0014. The ewe is a full sister to Lot 4 in today’s ram sale, CU 13-5034, the champion strong wool poll ram of the ASWA show. The ewe was unbeaten in poll Merino classes this year at the Great Southern Supreme Merino Show in Canberra and the Sydney Royal show. Mr Coddington aimed to flush the ewe before she is exported in August.

The Argentinians also made an offer for the show’s Grand Champion Poll and Ultrafine Merino ewe from the Victorian stud Wurrook, for an undisclosed price. Stud manager Paul Walton today said the sale was not confirmed. The two-year-old ewe was from the stud’s Ringmaster family. Wurrook also took out the grand champion poll ewe title at Bendigo last year with an ultrafine ewe.

The Victorian stud look out the Supreme Merino exhibit award at Bendigo’s 2015 Australian Sheep and Wool Show with their Grand Champion Superfine and Merino ewe.

Roseville Park Merino stud owner Matthew Coddington said he had sold two ewes at Bendigo to the Indalo stud – his reserve champion medium wool ewe and a class winner, at Bendigo, both Roseville Park 14 daughters. The Indalo stud was coming out to his Dubbo stud to buy more ewes and told him a recent flush of a Roseville Park ewe bought last year yielded 18 embryos. Mr Coddington said he sold the two ewes for less than $10,000 with the provision he could do a later delivery to allow him to flush them before export.

Mr Lopez said the Indalo flocks consisted of 50,000 Merinos and Corriedales. The stud owner wanted to buy top Merino ewes for an embryo transfer program. On Sunday afternoon he confirmed the stud had bought a ewe for $15,000 at the show, but refused to identify the breeder. He said offers had also been made on other sheep. The stud bought Merino ewes in Australia last year, he said.

Victorian breeder Rod Miller, from the Glen Paen stud at Brimpaen, turned down an offer of $10,000 from the Argentinians for his Grand Champion fine-medium and Merino ewe of the Show – a daughter of RP 14.

Mr Miller said he turned down the offer because he also wanted to put the ewe into an embryo transfer program.

“But I nearly accepted it – if he had kept going maybe I might have changed my mind.”