“I love a sunburnt country” – the poem rings true this year closing out with floods. Having grown up at a little place called Caloote on the lower Murray and a stint at Inverell in the early 2000’s I have seen a few floods both big and small. Speaking to those in the upper catchment areas any further rain may see another flood in the Murray system that will be spoken of for a long time. With nature we can never say never.

Salmonella and other diseases can impact livestock after flooding of paddocks with contamination of feed and drinking water posing a real risk. The most recent I know are sheep in Western Australia after the cyclone flooding early this year with very bad salmonella prior to offering for sale. This then passed down the line to the purchasers causing considerable issues. Contaminated water introduces the bacteria and will cause ill thrift, scours in young livestock and death within your mob/herd that may continue for many weeks. In the early stages many may think this is a worm infestation. Veterinary advice early will help avoid extended loses.

Graziers are in need of agistment for flooded livestock. If you have spare feed give a stock agency a call in an affected town and they will point you in the right direction of someone in need.

Impact on prices: This time last year I thought the prices were at the top for sheep and cattle. As we have seen lambs and sheep had a great run and have now settled back to be a little higher than last year, although following the normal trend. Cattle; however, have outstripped all expectations. As the rains have continued and dry areas have filled in grass has driven demand for improver cattle, held slaughter, export and feeder cattle back and moved females from processor to the bull. The rains received now can provide extended confidence that the beef job will hold for another six months driven purely by available feed.

I am not here to burst bubbles in any areas, but our seasons will return to normal and this rain will not last forever. Don’t let ‘grass fever‘ blind you of the stark facts that when it eventually stops raining and the grass stops growing, flexibility around sale windows disappears quickly. Remember we live in Australia, the biggest feedlot in the world when we add water, but there are no guarantees.

John Lindsay from Carter Lindsay Weber agency in Dubbo mentions suckers in his area are now being shorn unless they have significant weight. Dick Gleeson, Elders Branch manager at Inverell added lambs purchased to trade have done it tough in the New England, especially Merinos. ”It’s been too wet for too long and many have just tucked up because of black soil sticking to their feet,” Dick said.

Ron Rutledge, Nutrien Livestock Victoria/Riverina feels the spring lamb momentum has split into two parts. Those south of Bendigo to Millicent are in normal sell mode leading to Christmas. However, the country outside of the south into New South Wales and South Australia seem to be setting themselves for an Autumn flush of lambs that have been shorn and held over.

Speaking to others on this we tend to agree; if you grabbed some contract at $9/kg cwt early it is a very strong proposition. However, if you are just flying the spot market, the difference between the store price today and the fat price in March/April may not be that great. As always, I suggest you hedge your risk with a percentage on forward contract. If the market goes up this will form the basis of your average.

I caught up with Wayne Driscoll’s team at AWN Wimmera on my drive through Victoria this week. They mentioned lamb prices have eased back into the mid $8/kg for good trade however I noted Tuesday Bendigo report mentioned some still trading a little better than $9/kg. The upside was skin prices for clean suckers have improved from the early sales to be around $10.

Mutton has dropped into its slot as it does most years. It is consistently selling in saleyards at $5-$6/kg depending on weight, condition and skin.

It seems a long time ago now, but the feature first cross ewe sales happened early November at Naracoorte. A record $538 was set by the Coolawang 1.5 year-olds, but there were plenty of buyable ewes in the $300-$380 range across both sales. Speaking to agents and buyers after the sale, it was apparent that the vendors who put the time and effort in were well rewarded for size and presentation. On the buying side, quite a few put together some exceptional runs of ewes at good honest pricing that rewarded both vendor and buyer.

It does look as though I did win my sneaky schooner bet from last month with a couple of pens over $500 from Richard Harvie PPHS Naracoorte.

Invoice values This month’s StockCo invoices show lamb weights up by 3kg yet average $ per head value down $2 reflecting the softening of the store market.  Ewes averaged 57kg with a significant decrease in price of $43 across our average invoices. 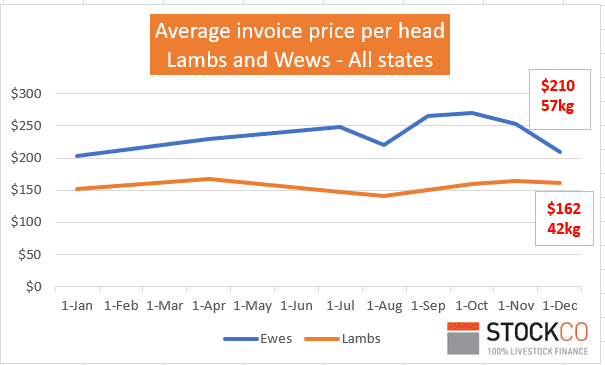 John Lindsay also said the annual cattle off crop surge has gone with a limited impact on the supply and demand pricing. John went on that the cattle job has been good for so long the small correction a couple of weeks ago caused more concern than normal. The rain impact on crops is significant through NSW and yet to be fully assessed.

In Victoria a Queensland order has impacted several of the sale centres with an immediate lift in pricing. I expect this is rain driven and when it starts to dry so will these orders in the south.

The weaner sales are upon us with WA up and running and SA launching into their sales over the next two weeks.

Remember the freight and spelling…Mt Barker WA (Not South Australia) is 2683km to Broken Hill.

Weaner sales at Naracoorte and Mt Gambier are firing between now and Xmas then the Victorians crank up straight after new year. Everyone has grass so do your numbers on freight, feed mapping and livestock finance before arriving at the sale. Animal health before sale for vendors and after purchase for buyers is an absolute priority at these prices. Engage a Livestock Production Advisor early and make every post a winner – just a great investment in your business.

Domestic grain fed supply has seen grids split heifer and steer rates for the first time in a number of years. With the additional demand for heifers as breeders the carcase pricing spread compared to the purchase price is becoming very narrow when considering a heifers lower average daily weight gain, potential in calf and riding in pens. Doing the sums is very important.

Invoice values This month’s StockCo invoices show steer weights are static with a jump in dollar value of $160. Heifer value lifted by $122 with average buy weight increased by 33kg 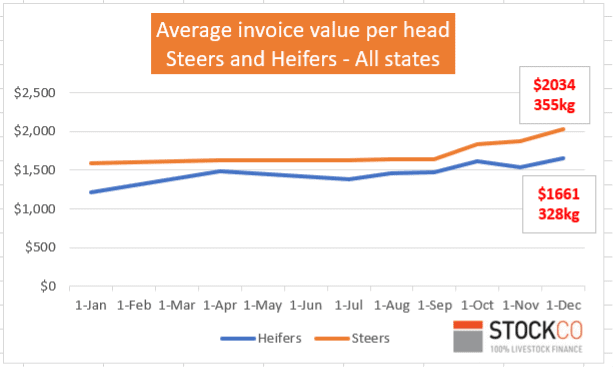 Quick update from Tony White, Gateway Livestock Dubbo. Good numbers reported prior to rain however the wet has slowed down movement and spread mobs out. Pricing on 20kg+ skin off goats up to $10.50/kg and skin on under 20kg averaging around $9.50. Information is the US demand is very buoyant and the TFI acquisition of the Bourke processing facility for goats is very positive.

Kids careers – some tips for mum and dad

With school winding up lots or young adults want to enter the work force in agriculture. Having previously managed a large trainee program for 10 years and still facilitating agency training for Wodonga TAFE my team saw 100’s of applications, resumes and interviews. At the end of the day a selection decision is made by employers and these are a couple of things that will improve their chances.

In paddock weighing is the future – I met Nigel Kerin, Kerin Poll Merinos at Beef in Rockhampton with Todd Clements from Bowyer Livermore agency in Bathurst. This quote from Nigel on a LinkedIn post is absolute gold. Use technology to get in front of the game. These systems will let you know of weight loss two weeks before it becomes a visual factor. 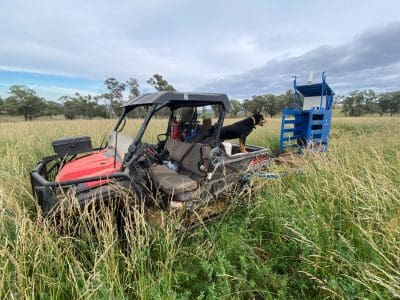