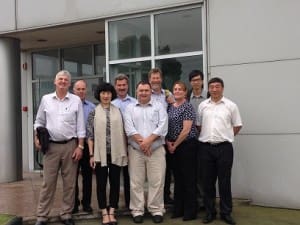 CHINESE processors have urged Australian wool producers to complete the National Wool Declaration when consigning clips, regardless of the mulesing status of the wool.

The advice was a key theme repeated by Chinese processors during a recent fact-finding mission to the country by five WoolProducers Australia directors and the chief executive officer Jo Hall.

WPA president Richard Halliday said while the demand for non-mulesed wool is still very small, it is increasing and by completing the NWD it allows those further down the supply-chain to know exactly what is being produced.

The delegation also found that Australian wool is still regarded as the best in the world in terms of quality and clip preparation, but there are still reports of contamination including both dark and medullated fibres and foreign objects being found in bales.

“The AWEX Woolclasser Code of Practice (COP) was seen as the reason that contamination in Australian wool was lower than other countries and the overall quality of clip preparation of wool was better than competitors, but growers and shed staff must remain vigilant to reduce contamination,” Mr Halliday said.

WPA has released a report on the mission to China, outlining the delegation’s finding from meetings with wool processors and other Chinese wool industry bodies to study supply-chain issues from a grower’s perspective.

The report highlights a number of recommendations to enhance supply-chain efficiencies, including greater feedback to growers regarding the concerns of processors.

“This was the first WoolProducers Australia delegation to go to China to meet with first and second stage processors along with other organisations such as the Chinese Ministry of Agriculture, China Wool Textiles Association and the Nanjing Wool Market,” Mr Halliday said.

The delegation was hosted by the Chinese Ministry of Agriculture and arranged through the Australia China Agricultural Cooperation Agreement (ACACA).