THE emergence of China is changing the dynamics of the global sheepmeat market as the largest producer, consumer and importer of mutton and lamb in the world, a recent report from Europe suggests.

In its World Sheep Meat Market to 2025 report, the International Meat Secretariat and the UK’s AHDB suggests the Chinese sheep sector has been under some pressure in recent years although output has still been increasing, competing strongly with imports. 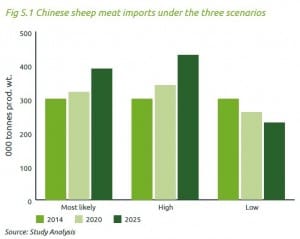 Production costs in China have increased sharply given rising costs of feed, fuel and labour driven by rising incomes in urban areas. Government policy has also included grazing bans to prevent overgrazing on the prairies which are very extensive in parts of China.

These were introduced in 2010 in order to return pastures to sustainable levels including the autonomous regions of Inner Mongolia and Xinjiang where sheep production is widespread. Competition for pastures is strong and in short supply, the report says.

Historically meat production has been a by-product of wool in China, but many producers are switching to raising sheep for meat or both meat and wool. Per capita consumption only amounts to about 1.5kg carcase weight per year, and is mainly consumed by higher income consumers in urban areas.

Sheepmeat is not widely consumed in poorer rural areas except in major producing sectors in the north such as Inner Mongolia. Given the importance of wool production, most sheepmeat is being consumed in the form of mutton and sold as such rather than lamb – although the latter is increasing.

As demand has been growing, prices have increased sharply which in turn has contributed to the growth in imports, but increasing domestic production has meant a slowing of imports.

A close look at the imported lamb trade shows a predominance of cheaper cuts shipped in frozen form. There is also a lack of ovens in the typical Chinese household, so cooking is focussed on hotpots (utilising breasts and flaps) which can be heavily seasoned.

Lamb is also used in BBQs (kebabs) and also sold rolled (flank and boneless shoulder and minced balls). New Zealand has been the largest imported supplier, with a market share ranging from 52pc to 56pc.  The balance is mainly supplied by Australia although Uruguay has emerged as a small supplier. While it is hard to gauge, the amount of sheepmeat (unlike beef) in the illegal grey trade appears to be minimal, the report said. 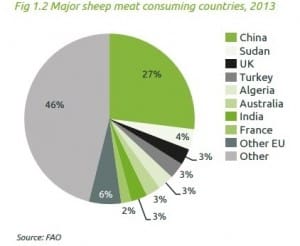 The increase in Chinese import demand is being met by Australia and New Zealand and the signing of FTAs is giving both countries a competitive advantage over other suppliers.

Higher income consumers are getting a taste for imported sheepmeat, even though the product is very expensive, the report said.

The modern retail sector and up-market hotel and restaurant sectors are also contributing to demand growth for imported sheep meat.

Published long-term sheep meat forecasts indicate a tight supply situation for the key exporting countries. Some growth is forecast for Australian lamb, but not for New Zealand. 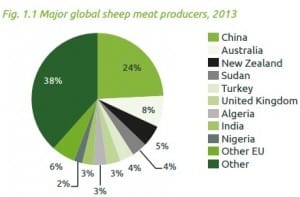 Combined Australian lamb and mutton exports to China in 2014 were valued at A$425 million, the second largest export market for Australian sheepmeat in value terms, behind the US.

In volume terms, China was the largest export market for our combined lamb and mutton shipments. In 2014, lamb exports to China were down 2pc and mutton shipments declined 14pc, due mostly to an unforeseen increase in Chinese domestic sheepmeat supply.

China officially imported 281,210 tonnes of sheepmeat from NZ, Australia and Uruguay in 2014, up 11pc compared with 2013. Total official imported sheepmeat was estimated to account for 12pc of the overall Chinese sheepmeat and goatmeat utilisation in 2014.

Fundamentals continued to indicate China’s strong long-term demand prospect for imported sheepmeat, in which New Zealand and Australia are the dominant suppliers.