A uniform fleece coat left underneath the weakened staple zone on a sheep treated for chemical defleecing during early research. Image – Phil Hynd.

After an industry forum at the Delegate Show last Friday, AWI’s acting chief executive officer John Roberts said AWI is happy with the progress of the chemical defleecing research and considers it an effective use of grower funds.

The research is being led by the university’s deputy head Animal and Veterinary Sciences Professor Phil Hynd, who with other researchers published a paper in 2014: Biological defleecing: intravenous infusion of amino acid mixtures lacking lysine and methionine creates a weakened zone in the wool staple, which is amenable to mechanical wool harvesting.

The researchers concluded then that although their trial results were encouraging, further work was required to develop a practical, on-farm method of altering systemic amino acid supply and to design an automated, high-throughput system of severing the weakened wool.

Their research focussed on creating a weakened zone within the wool staple – using a mixture of amino acids lacking lysine and methionine — allowing it to be sufficiently strong to retain the fleece on the sheep while a protective covering of wool regrows, but sufficiently weak as to allow painless and automated removal of the fleece.

In 2014, the researchers reported that the only alternative other chemical defleecing option – Bioclip — was based on injection of an epidermal growth factor that severs the fibre at the follicle level, but cannot be used in pregnant animals and required application of a net to retain the severed fleece. Bioclip is now owned by shearing equipment manufacturer Heiniger and the company has avoided comment on its intentions. 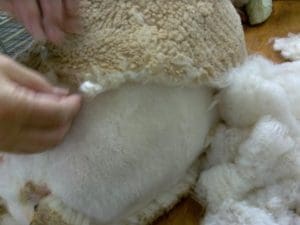 Wool being removed manually from a chemically defleeced sheep in an earlier study. Image – Phil Hynd.

Professor Hynd said he has been working on chemical defleecing for 15 years with varying levels of support, but his team has had “a bit of breakthrough” in making a weak point in the wool fibre for a very short period of time without causing abnormal fibre loss.

“We’ve just done a major experiment where we showed that even where you have animals in close quarters interacting with fences and one another a lot under normal grazing conditions, even up to 10 weeks (after treatment) they didn’t lose any more fibre than the controls.

“It has the beauty that when you apply the treatment – and we are currently working on getting that right – you wait 3-5 weeks and the wool grows out underneath the weak point and then you apply an engineering solution, which is also being discussed at the moment,” he said.

“It’s basically no combs and cutters, just an energy source applied to the fibre and it breaks very easily, but there is a long way to go.”

Professor Hynd said he has reviewed all the literature that would help researchers develop a product that could be commercialised.

“So we know what to target – that’s been the research breakthrough – but we now need to work out whether it is best to have an injectable or whether there is a drench or feeding solution.

“I’m doing a review of those options, to see which of those might be best.”

Professor Hynd said he is leaning toward a slow release injectable, “because farmers can handle needles and there would be no need for veterinary supervision.”

“It would be no different to giving a vaccination, but we’ve got to look at all options because it is early days.

“I’m pretty excited, but I am a fairly vintage researcher who understands that these things don’t always go linearly.”

Professor Hynd said the reviewing of a delivery method and machine harvesting options would be undertaken over the next three months before reporting back to AWI and he did not want expectations to be raised.

“This is a passion of mine and I would love nothing more than to deliver something to the industry that gave options.

“It is not necessarily to replace shearing and it’s giving people options that might be different,” he said.

He likened the potential of the development to the difference between the time-consuming harvesting grapes by hand versus using mechanical means.

“The wool industry, if we could have a way of harvesting the product not only cheaply, but easily and safely, but also having a better quality product – no second cuts, reduced noil for processing.

“I don’t get a lot out of this, I’m actually retired – I’m just doing it because I really want it to work.”

Mr Roberts told Sheep Central that AWI is waiting on the updated reports on the next stages of research and is especially pleased that after treatment there was no evidence of fibre losses in the treated sheep at pasture.

“Consequently, we believe it warrants further research and has real potential and it could well form a major part of our wool harvesting strategy.”

Mr Roberts told Sheep Central that in terms of other methods of wool harvesting under investigation by AWI, robotic shearing has the longest lead time.

“We are examining this area, but we are well aware that it could be very challenging.

“Training more shearers is always going to be core business.”

The latest disclosures on the state of the chemical defleecing research came after Mr Roberts outlined at the Delegate Show forum what AWI was funding in wool harvesting research and doing about the shearer shortage.

Hope for quick path to commercialisation

“I think we’ve got to look totally outside the square and just start afresh, because we’ve got revolutionise how we do this and we are going to have a change we might as well have a major change.

“The biggest threat to the wool industry at the moment is getting these sheep shorn on time, especially with the wet conditions we’ve had.”

At the forum, Delegate wool grower Ron Horton said he had asked where wool harvesting was going and wondered why there had been no information on the University of Adelaide research until now.

Mr Horton said wool harvesting is the most serious problem in the Australian wool industry for producers, with general shearing rate lifted to $4 a sheep last year “without any consultation.”

“I’ve heard of plenty of people who are paying $5 and $6 and they’ve basically got you by the short and curlies because who else is going to do it?

“Irrespective of that I think it is really time we moved on from the 1800s, isn’t it?” he said.

“We really do need to move on.”