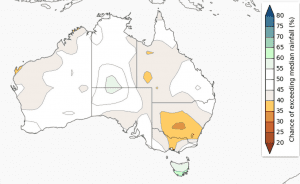 Chance of exceeding median rainfall September to November 2014. Source: BOM. Click on map to view in large format. (More outlook maps can be clicked below article)

The chances of a wetter or drier than usual Spring are considered roughly equal for large parts of Australia, according to the Bureau of Meteorology’s latest three monthly seasonal climate outlook.

The forecast for September to November, issued by the Bureau last Friday, suggests the that parts of the South East mainland – more specifically central Victoria and southern and central NSW, will experience a drier than normal Spring season.

However, for the remainder of Australia, the chances of a wetter or drier than usual September to November are roughly equal.

Southern Australia and parts of the northern tropics are more likely to see warmer than usual days.

Warmer than average nights are more likely for the southern half of Australia and the northern Cape York Peninsula in Queensland.Climate influences include a weakening negative Indian Ocean Dipole, and near-average to warm temperatures in the tropical Pacific Ocean.

POAMA, the Bureau’s seasonal outlook model, expects the tropical Pacific to warm slightly, but remain within the neutral range for the remainder of the year. Approximately half of the international climate models still suggest El Niño is likely.

The spring rainfall outlook for the country reflects this forecast, with a weak drier signal across the southeast of the country, and warmer daytime temperatures.

Outlook accuracy for the season is considered moderate to high over most of the eastern States and the NT.