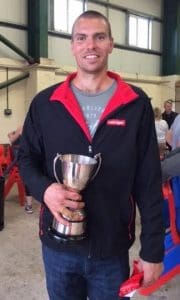 NEW Zealand shearers Rowland Smith and John Kirkpatrick, from Hawke’s Bay on the North Island, have extended their country’s run of UK successes by achieving the country’s eighth successive win in the Lakelands Shears Open final.

Smith was first and Kirkpatrick second in the event on Saturday (UK time) at Cockermouth in Cumbria, north west of England — the second stop on their 2016 Shearing Sports New Zealand CP Wool UK tour.

Smith previously won the Lakeland Shears in 2013, and was runner-up to Kiwi great, the now Sir David Fagan in 2011. The reigning world, Golden Shears and New Zealand champion, Smith has won 86 finals in an open-class career of 10 years, including 14 wins in the UK.

Kirkpatrick won the Lakeland title in 2007, 2010, and 2014, and last year New Zealanders were first, second and third in the event, shorn on the Herdwick breed, which is almost exclusive to the Lakeland region.

A week ago Smith and Kirkpatrick opened their tour with New Zealand’s first test match win over Scotland at the Lochearnhead Shears in 13 years.

There was no test match at the Lakeland Shears, but Smith and Kirkpatrick will face-up to England mid-week at the Great Yorkshire Show before heading west for three test matches against Wales at Lampeter, the Royal Welsh Show and Corwen.