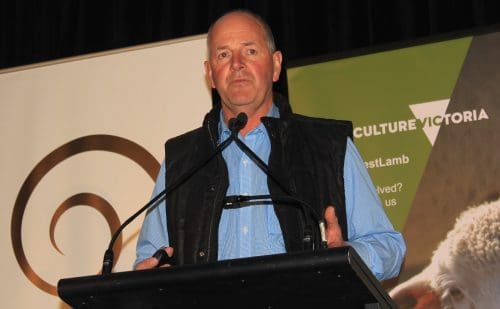 On Landline last Sunday he quoted Mecardo’s estimate of about 340,000 bales held in broker’s stores, and again suggested that wool held on properties and ongoing production could mean up to 2 million bales in storage by mid-2021.

The tweet prompted a response from Endeavour Wool Exports trading manager Josh Lamb who tweeted that to get to 1.5 million bales on hold the trade would need to not sell a bale for a whole year.

“Let’s not go for the tabloid headline.

“Growers should consider their 10-year (price) average and make an informed decision or be prepared to hold for 12mths+,” he wrote.

Mecardo general manager Robert Herrmann told Sheep Central that with the bale stocks that are accumulating now, and the expected volumes coming onto the market weekly, there could be about 2.4 million bales available for sale – new shorn production plus stocks – in the next calendar year

“That’s the critical number, I think.

“You can talk about bales in store if you like, but it is what is available to the trade that’s important, and can they absorb it?

“And if that becomes a factor and they can’t absorb it, that is an overhang on price into the future, which means farmers will either be continuing to pass wool in or accepting lower prices.”

Mecardo estimates there are 340,000-350,000 bales in broker stores, but has made no estimate of how much wool is held on farms. Fresh wool supplies to the market over the next six months are estimated at about 40,000 per week.

Mr Herrmann said stocks will grow weekly by the difference between the weekly fresh supplies and the number of bales that are sold.

Mr Herrmann said over the past 10 years the trade has sold on average about 2 million bales a year, although this has been lower over the past two years. Weekly auction sale volumes have been dropping since 2016 from about 39,250 bales to 26,540 in 2019-20.

He said Australia’s wool brokers are currently offering about 28,000-30,000 bales a week, but clearing only 20,000-25,000 bales. Mr Herrmann estimates that in 12 months at current passed-in and withdrawal rates, at current or lower price levels, a worst-case scenario could be about 1 million bales in stores. Raw fibre stocks are also growing worldwide, with global wool stocks estimated at 1 million tonnes, and cotton stocks at 3m tonnes, rising by 1m tonnes annually. 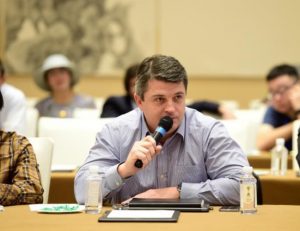 Wool exporter Josh Lamb at a wool conference in China.

Mr Lamb said the bigger the unofficial stockpile becomes the longer it will take for a proper price recovery.

“Because it (the price recovery) is going to be tempered by what is hanging over the market.

“So if it ends up being a million bales, who knows, we’re all guessing as to what it might actually be, will stifle the recovery of the market medium-term,” he said.

“What we don’t want is misinformation out there, because we don’t want customers overseas thinking there are 1.5 million bales lying around.”

Mr Lamb said growers should not expect that there will be a market recovery “sooner than later.”

“Any significant longer term rise in prices has got to be next year sometime, and all of us are guessing what is going on because we are in uncharted territory with what the pandemic is doing to the world at a retail level.

“So no-one really knows whether a recovery will come, but it is hard to see it any time soon, so if growers aren’t happy with the levels and don’t want to accept the levels, there is nothing wrong with that, but they have to be prepared to think longer term,” he said.

Mr Lamb agreed that there were risks associated with all growers selling their wool or everyone holding it, in the current demand climate.

“Of course there are, but by not selling you don’t know what you are getting, whereas if you are selling your wool, you’ve got a price in your hand and you know where you are at.”

On 10-year price averages, Mr Lamb said for medium micron Merino wool, the market has been good for a while “and maybe this is the one bad year,” he said.

“Not everyone can hold wool, that’s why we can’t see it getting to 1.5 million bales, because not every grower can just put his clip away and wait 12 months, there are other pressures that push growers into selling their wool.”

Customers being told of price resistance

“As exporters or buyers our information is only as good as is coming from the brokers.

“I think his figure is ballpark for where it stands at the moment, we don’t how big it could possibly get,” he said.

“We can’t see the market rebounding quickly, but we also can’t see a lot more downside.”

He said wool growers were putting wool straight “on hold” into storage and there is a lot of resistance to these price levels.

“We are telling our customers overseas, particularly in China, that there is heavy resistance at these levels and the industry won’t be profitable and won’t be inclined to continue to grow wool if the market was sustained at these levels longer term.”

Mr Lamb said the enquiry level at the end of last week was as good as it had been for a few months, and generally China based.

“It was very positive, at a price, of course.”

Too soon to estimate stocks next year

National of Wool Selling Brokers of Australia president Rowan Woods said he agreed with Mr Lamb’s estimation of the situation.

“It’s a bit sensational to be making claims of a stockpile of 1.5 million bales this far out.

“We had a very strong clearance last week and it doesn’t take much of a kick up in the market to restore a bit of confidence — people start to move a bit.

“People who are putting wool on the market now are generally sellers and people who are holding wool because it is simply not at a price point they are willing to accept or they don’t need the income,” Mr Woods said.

“It’s a long bow to say that we will be at 1.5 million bales (next year) — that’s just assuming that every bale that was produced isn’t going to be sold.

“Robert is using statistical data to arrive at a “possibility”, but the Landline comment is certainly sensational.”