Casterton Kelpie Muster will be serious fun this weekend 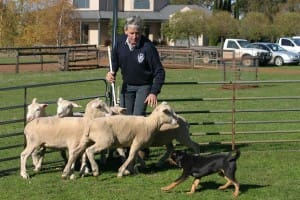 Ian O’Connell will be among the top Kelpie handlers to offer dogs at the Casterton auction.

Australia’s biggest working dog festival – the 18th Clark Rubber Australian Kelpie Muster – kicks off at Casterton this weekend with a range of events suited to stock handlers and dog lovers.

The three-day event starts on Saturday morning with a Poet’s Breakfast and Kelpie Country Street Parade, when community groups and organisations, clubs, businesses display their floats in Casterton’s main street.

But the main event for serious Kelpie owners will be the $8000 RMA Working Dog Futurity trial in the town’s main street, where dogs sold in previous auctions will vie for the highest prize money of any working dog event in Australia. The winner takes home $4000, second place gets $2000 and third place $1000. The vendor of the winning dog also receives $1000.

Futurity organiser Rod James said there will be eight entries in the futurity due to start at 8am on Saturday in Casterton’s main street. Entrants included two-time winner James Ridgway with two dogs, former competitors Travis Scott, Darren Holmberg, Andrew Kennedy and Ricky Jones, and new entrant Monty Warren. The judge will be Peter Allan from Tasmania.

In 2013, Matthew Johnson’s dog Tom won the first RMA Working Dog Futurity after selling the red Kelpie for the record price of $12,000 at the 2012 auction.  Last year James Ridgway took home $6000 in the futurity, winning with Kelpie Eddie for $4000 in prizemoney and then pocketing another $2000 for coming second with Karana Tack.

Mr James said working stockmen and women can expect a bigger lineup of fully trained dogs in the Clark Rubber Working Dog Auction on Sunday. Demonstrations will start at 9am in Island Park with about 80 dogs and pups auctioned from 3pm.

“I think there is more depth in the mature dogs,” Mr James said.

Mr James said there had been a lot of interest around the auction, with more vendors putting clips of their dogs on Youtube and on websites. There will be 19 pups under six months of age will be offered, plus several that have already been started on stock.

The Stockman’s Challenge on Saturday has attracted a top field of 14 local and interstate stockmen and women. The challenge is a serious test of skill by the rider, stockhorse and working dog, herding sheep through an obstacle course and into a yard. Mr James said the new competitors in the event include Maffra’s Michael Hiscock, a two-time winner of campdrafting’s Melbourne Cup, the Warwick Gold Cup. Other newcomers include Nigel Smith from Robe, Tom McMahon from Derrinallum and Ryan Lenehan from Kirkstall.

Saturday also has a full program of novelty events for owners and dogs vying for the King of the Kelpies title – accruing points in the Kelpie Hill Climb, Kelpie Dash and dog jump events, also known as the Kelpie Triathlon.

Other events include the Kelpie Idol for the good looking dogs, Kelpie Pinball where you will see ducks being rounded up and Mutton Mayhem, where the fastest sheep with its mock jockey wins.

There will also be a wildlife display, shearing demonstrations and a variety of activities and novelties for everyone to participate in — like six and 11-legged races, dog most like it’s owner, egg/spoon and the fattest dog.

On Monday, June 8, the Casterton Kelpie program winds up with the working dog school which will be hosted by renowned working dog trainer Matthew Johnson, who runs the Pandara Kelpie Stud with his wife Margie. Matthew has won several Tasmanian Yard Dog Championships, has represented Tasmania at the Australian Yard Dog Championships and is a renowned trainer and vendor at our Clark Rubber Working Dog Auction.

All enquiries about the working dog futurity should be made with Rodney James on 03 5579 1374. Bookings are essential. Working dog auction enquiries should go to Nicky Holmberg on 0438 052 394.

Any other Casterton Kelpie Association and general festival enquiries can be made to the secretary, Linda Thompson on 0488 791 424 or visit the website www.kelpies-casterton.org