AUSTRALIAN agriculture needs to develop a clear framework showcasing sustainability and decarbonisation credentials to investors and customers if it is to stay globally competitive.

That was a recurrent call from a number of speakers at the Australian Farm Institute’s ‘Agriculture and trade in disrupted economies’ conference in Toowoomba this week.

Reserve Bank of Australia governor, Philip Lowe, said the need for a standardised mechanism for disclosing decarbonisation strategies was becoming an increasingly important issue for businesses, including those involved in agriculture.

“I participate in many international meetings.

A very frequent question that comes up in those meetings is: What is Australian business doing to decarbonise? Many international investors are very focused on this issue,” he said.

“It is particularly important for the agricultural sector because roughly 70 percent of agricultural output in Australia gets exported. Increasingly, overseas investors are asking about the carbon content of production.

“That’s a trend that is only going to continue,” he said.

“Australian agriculture has tremendous opportunities, but we need to find ways to disclose to global investors and customers our decarbonisation strategy and how successful we are doing that.”

Dr Lowe said as the international focus on carbon increased, people were going to be looking for stronger, more credible analysis and standardisation.

“There are emerging templates where financial institutions and businesses will be expected to disclose their carbon footprint.

“The international investment community will be looking at those templates. We have a good story to tell, but we need a mechanism to tell it,” he said.

Carbon is the new king – McDonagh

AgriVision Australia owner and director, Eimear McDonagh, who is involved in the cotton and grain trading industry, said carbon was emerging as a provenance attribute for agricultural products.

“Carbon is the new thing.

“We had sustainability, traceability and now carbon,” she said.

“I think all three should be linked together.”

Ms McDonagh said when it came to selling ag products, the market was going to increasingly develop around the carbon story.

“When it’s processed, when it’s on-sold to retailing or when the person buying the end product has a discussion in the board room about the suitability in the carbon space, then they will have to come back through the supply chain and be able to map what they are doing.

“If we don’t get a proper framework or measure we might not be the preferred supplier of product,” she said.

“It is about market access, so we need to start to build a framework around that.

“It is going to be the next driver of demand in the agricultural space,” Ms McDonagh said.

“Carbon is really important to the first-touch customer.

“A positive carbon framework and a structure to work within in the agricultural space is something that will give us an advantage.” 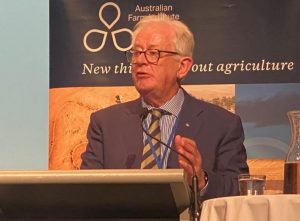 Former Minister for Trade, Investment and Tourism, Andrew Robb, said there were moves to develop a carbon and sustainability framework for agriculture, but it was currently very fragmented.

“We have to have one standard, otherwise it is enormously complicated and we undermine ourselves,” he said.

“There is so much of agriculture where the collaboration is just not there, not just at the production level but through the whole supply chain.

“Sharing the data about what is being done on the carbon issue is fundamental to helping all our marketers speak with one voice, help educate the marketplace and help stop others using it as a non-tariff barrier against us.”

GrainGrowers chair and Victorian grower, Brett Hosking, said the farmer representative body was in the process of developing a sustainability framework for the grains industry.

“We have a great story to tell with Australian grain, but there are areas we can do better.

“A sustainability framework gives us the opportunity to tell our story, why we are doing it and what we are achieving. But it also challenges us to be better,” he said.

“Carbon is one of those spaces in particular.

“There is a lot of talk about carbon being really important for trade,” Mr Hosking said.

“Nearly 99pc of the grain grown in Australia is rain-fed.

“We are heavily reliant on what the season dishes up each year.”

Mr Hosking said the biggest disruptor the Australian grain industry faced is another drought like east coast experienced a couple of years ago.

“We will see more of that; we are seeing the extreme weather events.

“From our industry point of view, we have to play our part in the carbon space and the climate space, because we can’t afford not to.”

Wilson International Trade director, Peter Wilson, said in his dealings with international grain buyers, particularly on the sub-Continent, the discussion was more so on sustainability, rather than carbon.

“Most of the people I talk to in Bangladesh and Pakistan aren’t really focused on carbon, they just want cheap food as often as they can get it.

“But sustainability is a concern and provenance is critical,” he said.

“Some of the things that can impact us are how sustainable your business is, what the MRLs (maximum residue limits) are.

“If we want to get into the premium markets we better make sure we have our story right,” Mr Wilson said.

“We need to be able to demonstrate that our food safety system is world class.”