Calls for AWI termination and change among positive grower views 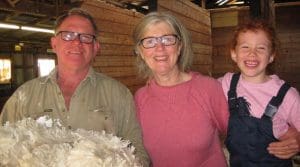 Western District wool growers Brendan and Susan Finnigan with grand daughter Madison, have had their say on AWI.

A CALL for Australian Wool Innovation to be terminated and the compulsory wool levy to cease is among the more sensational grower submissions to the latest performance and governance review of the research, development and marketing body.

Many of the growers who made personal submissions to the latest review of AWI have argued that the levy-funded body is doing a good job.

However, of Australia’s wool growers and organisations who have had their say about AWI, much of it is not complimentary.

The Department of Agriculture and Water Resources has published on its website 44 submissions to the review of AWI’s operations from 2015-2018, reporting to wool growers and the government prior to WoolPoll 2018.

In its review submission, the Australian Wool Growers Association recommends that AWI and its compulsory wool levy to be scrapped, in favour of a model similar to New Zealand Merino where growers are able to voluntarily support AWI if it delivers profit, dividends or benefit.

In a theme consistent with submissions from peak grower body WoolProducers Australia and others, AWGA submits that the Woolpoll process has been interfered with consistently by the AWI board and the levy split between research and marketing has never been voted on by levy payers. In 2015, the AWI board ignored a national grower and WoolPoll panel recommendation for 1.5pc levy option.

“Control of the AWI board by a dominant faction, has under the existing director election process, including a flawed board nomination committee and open proxies used by the chairman to ensure control for a narrow agenda for some growers,” AWGA argues.

AWGA also asks how AWI chairman Wal Merriman is able to vote on key genetic research and extension program decisions, while also being a major genetics provider the industry as managing director of the Merryville Merino Stud. The AWGA submission also suggested that the ‘Mirrorgate’ incident highlighted breaches of the SFA’s conflict of interest clauses.

WPA argues that the manner in which AWI’s biennial director elections and the triennial vote in WoolPoll are conducted, despite being managed in accordance with relevant requirements and regulations, are heavily influenced and controlled by the AWI board.

“This diminishes the genuine ability of shareholders to exercise influence on the company, but also demonstrates that the current governance and regulatory frameworks that AWI operates in are deeply flawed.

“The current governance arrangements employed by AWI are flawed (as) demonstrated through the lack of transparency and accountability across a range of important activities that AWI engage in, from industry consultation through to levy expenditure decisions.”

WPA has recommended there be a complete overhaul of AWI’s corporate governance policies and procedures, including conflict of interest, business ethics, codes of conduct and independence.

WPA said while there are well documented governance frameworks, including the constitution, Statutory Funding Agreement, policies and procedures, these are rarely enforced internally by AWI or externally by the Federal Government “and are therefore to a large extent meaningless.”

WPA said the Statutory Funding Agreement broadly sets out the roles, responsibilities and management of levies of AWI.

“While the document is high-level, there has been very little enforcement of the requirements by the government, particularly in the areas of potential breaches of clauses covering agri-political activities and industry consultation.

“The SFA has strict requirements for AWI not engaging in agri-political activities, however there are many examples of undertakings by AWI that could be argued to fit this criteria.”

“Although consultation is a requirement under the SFA, there is an inability by AWI to distinguish between consultation, communication and engagement.”

WPA said the lack of independent oversight over AWI has caused many issues with the operations of this organisation since its inception, and it has proposed the establishment of a formalised Memorandum of Understanding (MoU) between AWI and WPA, “or other like mechanism, as is currently the case with the red meat RDC, Meat and Livestock Australia, and its prescribed industry representative bodies.

WPA also wants more stringent criteria for agri-political activities and safeguards against AWI breaching these criteria under the SFA.

“The present industry structure is reactive and inflexible and not appropriate for managing a compulsory levy and tax payer dollars.

“The power of the AWI board is disproportionately large and there is inadequate accountability or transparency to monitor this control.”

Referring to WPA said there have been “a number of high-profile, unsavoury incidents over the past 12 months involving AWI which reflect on the conduct and operations of the AWI board.”

“These incidents, and the subsequent lack of response from the board, raise questions over the culture of the organisation.”

On the positive side of the ledger, a submission from the Queensland stud and commercial operation of former WoolPoll chairman Will Roberts and his family argued that AWI is meeting its obligations under the Statutory Funding Agreement 2016-2020 with the Commonwealth and the Wool Services Privatisation Act 2000.

“It is an audited process and as a result AWI has to comply.

“The board of AWI is a duly elected board by shareholders and as such has our complete confidence that the governance arrangements are effective and AWI is delivering benefits to wool growers.”

The Robert’s submission said AWI has delivered higher wool prices to growers as a result of its marketing programs throughout the world and had funded “our” cluster fence group to help clean the wild dogs out.

“We believe that AWI strives to engage, consult and communicate effectively.

“We are very happy with the way AWI conducts itself and the role it plays in our industry.”

Grower Warren Duncan said the AWI team is working for a better wool industry and has brought it out of a “huge hole.”

“I feel that their enthusiasm should be commended not put under scrutiny.

“Without this group our industry would have spiralled due to pressure by over leveraged minority groups.”

Grower Heather Dalla said she was very pleased with the current board of AWI and believes they are doing a fantastic job.

“Since Wally Merriman has been chairman the price of wool has lifted from being 3 x price of cotton to 8 x price cotton.

“This is because that the small cost they have invested in marketing has been invaluable,” she said. “Without AWI sheep producers would be lost.”

Virginia Hawker, from the Collins family that once owned the Collinsville Merino stud, said she had no concerns about AWI is not meeting its statutory funding obligations.

“AWI, under its current leadership performing is superbly and delivering outstanding results to its shareholders.

“The board election process of AWI is totally democratic especially when compared with MLA, CCA and SCA,” she said.

“Every woolgrower has the opportunity to elect the board, and anyone can stand for the board if they obtain sufficient wool grower votes.

“Their detractors, some sections of the media and several senators have agendas to destabilize the company for their own purposes,” Ms Collins said.

“They are held in contempt by the vast majority of wool growers who are grateful to have people of such high calibre on the board, and in senior executive positions of AWI.

“By any measure, AWI is exceeding market expectations with wool at the highest prices for decades across most microns.”

“The current state of the industry proves that; my financial returns from wool have never been better.”

Call for integration with MLA

“I believe that this marketing strategy which precludes significant research into innovative practices and production systems and is antagonistic towards productivity increases has directly contributed to price increases.

Sheep meat producer Tim Gubbins believed AWI as a body representing wool producers has “left prime lamb producers behind somewhat” and wanted more attention to genetics that focus on wool and meat and the phasing out of mulesing.

Recognising a need to demonstrate a commitment to sustainable production, land stewardship and animal welfare Robyn Alders suggested a “whole-of-enterprise” approach and more effective integration with Meat & Livestock Australia could increase wool producers’ profile on “animal-source food production, the longevity of wool sheep and the ability of wool production to offset the carbon footprint of red meat production.”

A spokesman for AWI review EY Australia said the period for submissions has closed and the report is being finalised.  It will be released by the department in due course, he said.