Call to keep wool in the cropping system 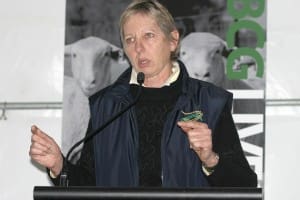 Keep wool in the mix was the message to croppers at the Birchip Cropping Group’s annual Sheep Management Showcase yesterday.

“It just manages your risk a little bit more.”

Ms Jolly said the key profit drivers and pressures varied depending on the sheep system adopted and the relative wool income and weaning percentages achieved.

“The most important thing about running a successful sheep enterprise is that the sheep that you run, you actually like.”

Based on Birchip district lambing figures, Ms Jolly compared a number of different flocks to a benchmark self-replacing Merino flock with 40 percent joined to terminal rams, with the Merino-Merino mating weaning 100pc lambs and the Merino-terminal weaning 120pc.

“So based on that production system of 1000 ewes in this environment the gross margin per hectare running on 380 hectares of winter-grazed pasture is around about $239 a hectare.”

The flocks compared included Merino and first cross flocks joined entirely with terminal rams, and shedding sheep flocks, but adjusted their weaning percentages to get an equivalent gross margin per hectare to the SR Merino flock.

“What that clearly shows you, is that if you prefer to run Merino ewes as breeders and join them all to terminal sires and sell all the lambs off and buy replacement ewe lambs in at a conservative price of $140 a year, then you need to be weaning about 106 per cent to get the equivalent bottom line that you are getting out of a self-replacing Merino flock.”

As producers moved away from maximising their wool income toward a crossbred or shedding sheep base, to generate income similar to that of self-replacing Merino, increasing pressure was put on lamb weaning percentage, she said.

“So in a lot of ways your risk profile starts to go up because it is much more difficult to wean lots of lambs than it is to grow wool.

“And that’s OK if that’s what you want to do, but you just need to be aware of what sort of pressures you are introducing into your system.”

“So if you then decide that you want to run wool-shedding sheep, which don’t have to be shorn, then suddenly you need to start weaning about 150pc lambs to compete economically with a self-replacing Merino flock,” she said.

“Whatever production system you have got, just make sure that you are achieving what you need to be optimising your income opportunities.”

The pressure weaning percentages is “really on” with shedding ewes that still need to be shorn, Ms Jolly said.

“Certainly your cost of production to weaning is much lower, down around $40, because you don’t have a lot of those input costs, but that doesn’t automatically transfer into just making more money, because you have got rid of wool.”

“Because if that fleece weight drops you have got to find another 20pc lambs to sell to compensate.”

Ms Jolly said lamb growth rate impact on gross margins increased with the intensity of the operation. But gross margin of up to $900 a hectare were possible if lamb growth rates were boosted to 200gms a day, genetically or by finishing lambs on cereal crops.