Call for improvement on skin, nylon and foreign contamination in wool oddments 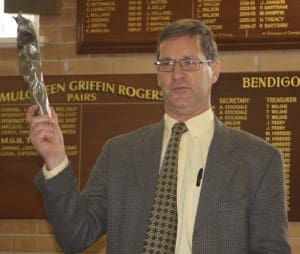 “Probably one out of every 20,000 bales you would find something coming through and really what it all comes back to is care in the shearing shed.”

But he said contamination like pieces of metal caused problems, breaking spikes on opening rollers. It cost about $2000 an hour to run the mill and a piece of metal recently shut operations down for an hour.

Mr Ritchie said the incidence of bales being used as bale dividers was not improving.

“These are a definite no-no…yesterday’s paper is far better, it costs you nothing.”

The bale dividers shred in the machinery and nylon is spread through the wool, he said.

“This is not improving, it is probably staying the same — this is one I really would encourage you to get rid of.”

Several years ago it took about three months to pick a shredded nylon bale divider out of wool valued at $150,000, he said.

“If you could take just a little bit of care in the shearing shed it would save us a lot of money.”

Mr Ritchie said the rag content in bales was also not improving and baling twine caused major problems for VWP.

Skin in wool is a major problem for industry

“It is a major, major problem.”

“Reportedly they had one person, one bale, one day.

“We lost a lot of money because of the amount of skin in lambs wool.”

Mr Ritchie said the Federation of Australian Wool Organisations had received a letter of complaint from China about the increasing levels of skin. He suspected with increasing labour costs the number of pickers had been cut back.

“I suspect it (skin contamination) is about the same and a lot of improvement would help everyone, but I don’t actually think it is getting worse.”

Mr Ritchie said correct clip preparation was part of the equation for growers aiming to realise premiums for their oddments at auction. VWP did not buy wool direct from growers, he said.

“We buy at auction — If you want to get a good price for your wool, send it to auction.”

VWP was the 11th biggest wool buyer in Australia, but one of only three early stage wool processors left in Melbourne.

VWP closed its scouring plant in December, but now processes about 60,000 bales a year through its carbonising plant.