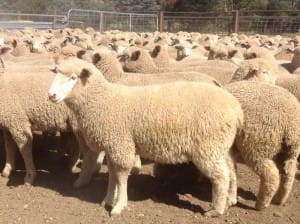 LAMB prices held were generally firm to slightly easier in saleyards mid-week, with rates fluctuating around quality and the strength of domestic trade and restocking demand.

At Carcoar this week quality trade lambs were $4-$8 dearer, lifting to be similar to rates at Wagga, where not all domestic processors operated.

Restockers were quieter in some centres, discounting secondary lambs, including Merinos.

The new season turn-off started in earnest at Hamilton this week, with prices up $3-$5, but some producers still watching the skies for rain to help decide whether to sell lambs or shear and run them on.

Earlier this month Kerr and Co Livestock auctioneer Craig Pertzel had been concerned that without rain this month the turn-off at Hamilton might clash with northern yardings and drop prices.

He had urged some producers to shear their lambs in early October and leave them on their mothers to finish and regrow enough pelt for marketing by December.

“That’s when they are going to be short of lambs, in around Christmas and the New Year.”

“One thing we should have learned after a few short sharp dry springs over the last few years, it’s amazing how the stock continue to do alright even though the grass is turning.

“The clover burr and the seed on the ryegrass will still hold the lambs.”

But today Mr Pertzel said despite the sharp rise in the number of lambs at Hamilton on Wednesday, he expected yardings to ease next week and lift in late November.

“We’ll be right, the numbers have gone in the north, we won’t have huge numbers here next week.

“They will increase significantly around the week of November 18,” he said.

“The numbers in the north won’t be a worry to us, we’re home I reckon, it won’t matter whether we get rain or not now.”

The ESDI for mutton lifted 1 cents to 326c/kg and the national mutton indicator rose 2 cents to 328c/kg.

In New South Wales at the Central Tablelands Livestock Exchange at Carcoar on Wednesday, the agents yarded 7500 lambs, 550 fewer than last week, and 2200 sheep, 700 less.

The NLRS said it was a better quality yarding with more well-finished trade and heavy weight new season lambs, and a fair selection of lighter weights suiting restocker orders.

The NLRS said lamb quality slipped, with more showing dryness. All the usual processors attended, but not all major domestic buyers operated. Well-bred store lambs were well supplied and local restockers were active over all weights. New season trade lambs were in reasonable supply and sold to solid demand, with better finished lines commanding premium prices.

Horsham lambs up to $5 easier

The NLRS said it was an average to good quality lamb yarding for the usual buyers.

Better trade lambs sold to $130 and the better heavy lambs to $141. Lambs generally sold a few dollars easier to be $5 easier in places. Some lambs are starting to show dryness in the skins. Restockers and feeders were active and paid mostly from $76-$95, and from $51-$65 for the lighter lots.

The NLRS said there was a sharp rise in lamb supply as the new season turn-off started. At least five more buyers attended. Most operated in the slightly stronger sale, along with more restocker interest locally and from Deniliquin.

Quality was average to quite good in the new season lambs, with most being 2-3 scores of mainly light and medium trade weights, but showing dryness. Some heavy trade 4 scores 22-24kg were penned.

In South Australia at the Mt Gambier saleyards on Wednesday, the agents yarded 5445 lambs, 497 more than last week, and 275 sheep, 67 fewer.

The NLRS said it was a mixed quality lamb yarding, dominated by unfinished lambs, with prices firm to slightly easier on last week. All the usual buyers attended.

In Queensland at the Warwick saleyards on Wednesday, the agents yarded 1239 lambs and hoggets, and 77 sheep.

All descriptions sold dearer in the limited yarding of sheep and lambs. The top-priced lambs made $134 for R.R. and N. Potticary of Oakey. They weighed 58kg lwt.