Buyers chase yield and weight in trade and heavy suckers 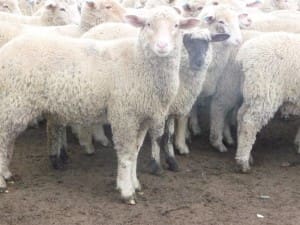 National Livestock Reporting Service sale summary price ranges indicate more trade and heavy suckers were bought under 550c/kg mid-week, while the best fresh, sappy and better yielding 18.1-22kg cwt lines sold to 620c/kg at Carcoar, to 650c/kg at Wagga, to 609c/kg at Horsham and to 630c/kg at Ouyen.

Elders auctioneer at Wagga Joe Wilks said processor demand was stronger for a better quality offering of trade and heavy new season lambs at the centre this week. Export demand on 12.1-18kg suckers was also stronger and restockers were active on light lambs.

“I think it was quality this week – they were sappy, they were fresh, so they knew these ones would yield, rather than buying drier skins and not getting the yield out of them,” he said.

Landmark Wagga livestock manager Peter Cabot said there more lighter lambs had come into the centre recently and major processors this week were looking to increase the average carcase weights of their purchases with heavier, higher-yielding lambs.

The mutton indicators lifted 1 cent on Thursday, with the ESDI on 368c/kg and the national indicator on 366c/k.

The NLRS said the plain quality penning had just a few pens of properly finished new season and heavy weight old lambs. Most of the yarding was tail-end lambs showing the effects of the winter.

The NLRS said the quality of the estimated 11,320 new season lambs was very good. Old lamb numbers declined and quality was mixed, with a limited portion supplementary fed or crop-finished. A full turn-out of domestic and export buyers operated, along with stronger competition from restockers for new season lambs in good condition with frame. New season lambs regained some of the recent falls as buyers balanced purchases between heavy and lighter trade weight categories.

A mixed selection of heavy and extra heavy lambs was offered and sold to a regular group of buyers. Lambs weighing 24-26kg sold up to $4 cheaper, with extra heavy lambs making $161-$205.80 and averaging 576c/kg.

Merino lambs were well-supplied, but quality varied greatly through each category. The better finished trade Merino lambs sold from $110-$133.

The NLRS said the yarding was again mixed for the lambs, with a couple of good quality pens, and better for sheep. A smaller field of buyers attended, but not all operated, though demand remained steady throughout.

The NLRS said about 1000 new season young lambs were penned. Most of the regular buyers attended, but not all operated fully. Trade weight and heavy old lambs generally sold firm, on quality.

Most sheep sold to a dearer trend in a yarding that included all weights and grades, with some heavy runs of crossbreds. More recently shorn Merino sheep were offered. Restockers paid from $86.50-$97.50 for full wool Merino ewes in light condition.

The Ouyen Livestock Exchange reported prices as buoyant despite the absence of a couple of the usual buyers.

Fresher lambs sold $2-$5 dearer. Prices for most of the lambs in all weights and grades sold firm. Mutton were firm to $5 dearer.

In Western Australia at the Katanning saleyards on Thursday, the agents yarded 4069 lambs, 1931 fewer than last week, and 500 sheep.

The NLRS said it was a mixed quality yarding. All buyers attended.

In Queensland at the Warwick saleyards on Wednesday, the agents yarded 1222 lambs and hoggets, and 481 sheep at the weekly sale.

The Warwick Livestock Selling Agents Association said the market was firm to a shade easier for the heavy lambs and cheaper for the lighter drier types. The top-priced heavy weight lambs made $144 for Swan Creek producer Andrew Coy.

The NLRS said smaller yardings and quality at the Powranna and Killafaddy saleyards on Tuesday reflected the very cold winter. With one regular buyer very quiet, most prices were $4-$6 cheaper. Light export lambs made $65-$84, light trade weights sold from $87-$96 and heavier trade weights ranged from $119-$129. Heavy weight lambs sold from $141-$143 and extra heavy weights made from $145-$153.

The sheep were mainly light ewes, with almost no good quality medium weights. Prices were generally $3 cheaper. Light ewes made $40-$68 and a few heavy ewes sold from $85-$95.