Sportsmans Double Diamond sets a new UK sheep record selling for 350,000gns. The most talked about lamb of the year sets trade alight at Lanark.

A BRITISH Texel ram lamb has set a new world record price of more than A$667,000 in the Scottish National Texel Sale at the Lanark Agricultural Centre in Scotland.

The lamb called Sportsmans Double Diamond came from Sportsman flock of Charlie Boden and family at Stockport in the north-west county of Cheshire. The lamb was one of 19 to make 10,000gns or more in the sale on 26-27 August. It was sired by the 65,000gns Lanark champion from last year, Garngour Craftsman, judged by Charlie Boden, and is an embryo-bred lamb from a ewe lamb flushed last year and sired by the 32,000gns Plasucha Big Gun.

The British Texel Society said Double Diamond carries an index in the top 1 percent of the breed (see catalogue reference) and was met with an opening bid of 10,000gns. The price quickly escalated, with a rarely seen bidding war between a brace of consortiums, resulting in Brian Ross’ hammer finally falling in favour of a three-way partnership between Alan Blackwood, Auldhouseburn, Maybole, Procters Farm, Procters, Lancashire and Messrs Teward, New View, Darlington.

The second best price of the day was 65,000gns for Hexel Django from Donald and Sarah MacPherson.

Charlie Boden also spent some of his earnings in the sale, buying a lamb from the Wight family, Midlock at 26,000gns. 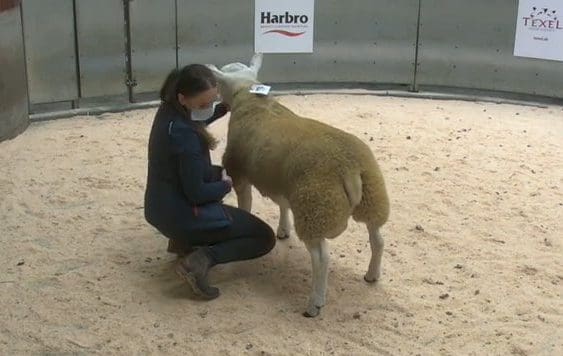 The British Texel Sheep Society’s website said the popularity of the breed meant animals with elite genetics regularly sell for five figure prices, and occasionally for six figure amounts. The breed also recorded the previous highest priced sheep sale in the United Kingdom when Deveronvale Perfection sold for 220,000gns (£231,000) at the Scottish National Sale, Lanark, in 2009.

British Texels are known for their extreme muscling and high lean meat yields. The breed dominates the UK sheep industry, with a 27 percent share of the ram market, according to the 2012 EBLEX British Sheep Breed Survey. Texel crosses accounting for 1.6 million crossbred ewes, more than 12pc of the total ewe flock, according to the society. Most livestock in the UK are still sold in guineas and a guinea is worth about £1.05.

The highest price for a sheep in Australia is believed to be the A$450,000 paid for possession and half the semen rights of a Collinsville stud ram in 1989.