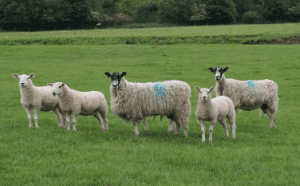 Sheep and lambs in the United Kingdom. Picture: NSA.

A FREE trade deal between the United Kingdom and Australia or New Zealand could have a catastrophic effect on British sheep farmers, according to the National Sheep Association.

The NSA represents the views and interests of UK sheep producers, and yesterday said it was encouraged to see activity to negotiate trade agreements for when the UK leaves the European Union.

However, the NSA said it was seriously alarmed that Australia is proposing a free trade deal.

At the recent G20 summit in Prime Minister Malcolm Turnbull and British Prime Minister Theresa May discussed negotiating a post-Brexit trade deal. On Wednesday, the UK’s Secretary of State for International Trade Liam Fox and Australia’s Minister for Trade, Tourism and Investment Steven Ciobo said they had agreed to establish a bilateral trade working group “to focus on scoping out the parameters of a future ambitious and comprehensive Australia-UK free trade agreement.”

However, Mr Ciobo later said parallel negotiations with the European Union would have to be completed before any post-Brexit trade deal between Australia and the UK. It could be at least 2.5 years before formal Australia-UK talks start.

Within the EU, the UK has historically been the major destination for Australian lamb and mutton, accounting for 80pc of total exports last year, MLA said.

Australian lamb and mutton exports to the EU are expected to remain steady in 2016, with its allocated quota forecast to be filled. The quota restrictions will prevent any growth, with the tight Australian and New Zealand supply forecast for 2016 helping to at least maintain prices, despite the increase expected in UK lamb production, MLA said.

NSA chief executive Phil Stocker said NSA understood Australia has been pushing to increase its EU quota for many years.

“So there is no doubt it would send larger amounts of sheep meat to Europe and the UK given the opportunity.

“The UK sheep sector is already suffering unacceptably high levels of imports of New Zealand lamb, much of which is sourced by retailers at times of the year when UK product is in plentiful supply,” he said.

“We would be keen to see an outcome of Brexit being tighter controls on New Zealand lamb being allowed into this country, and we certainly need to avoid making the situation worse by allowing Australian product to head our way too.”

Mr Stocker said the UK is currently an importer and exporter of lamb, which helped balance supply and demand through the year and exploited ideal sheep producing conditions in the UK.

“However, NSA believes more should be done to grow the UK domestic market and increase self-sufficiency in lamb production and consumption – especially as we do not know what access we will have to EU markets in the future.

“We currently export around 36pc of UK lamb, with France and the rest of the EU taking the majority of this,” he said.

“A priority for our sector is negotiating a trade deal with the EU post-Brexit.”

“A free trade deal with Australia or New Zealand may be beneficial for some UK industries but could have a catastrophic effect on UK sheep farmers and we cannot sit back and be sacrificed for the benefit of others,” Mr Stocker said.

“Given the fundamental role our sheep sector has in maintaining the rural environment, landscape and community in the UK, we cannot afford to be overlooked in crucial trade negotiations.

“We encourage the UK Government to work hard on these deals, but not to rush into agreements without considering the wider consequences.”

The September 7 statement from Mr Fox and Mr Ciobo said they want the FTA working group to advance an agenda that will ensure the expeditious transition to FTA negotiations when the UK has formally completed its negotiations to exit the EU.

“Both of us want a future FTA to generate new trade and investment opportunities.

“We will prioritise consultation and outreach to our respective stakeholders to seek their input to the work of the working group,” they said.

The working group will be convened at senior officials’ level. In addition to preparing for bilateral FTA negotiations, its agenda will include other trade policy issues of mutual interest, including WTO processes and current and prospective plurilateral negotiations, the statement said.

“To maintain momentum, we have agreed to meet twice annually to review progress in the working group.

“Our first such meeting will take place in early 2017 in Australia,” the UK and Australian ministers said.

The 2017 meeting will be preceded by discussions in Australia later this year during the planned visit by Lord Price CVO, the UK’s Minister of State for Trade Policy.

This initiative reflects a strong political commitment by Australia and the UK to take a leadership role in advocating for global trade liberalisation and reform, the joint statement said.