Bree and Zoe won the event by just four points in a hard-fought and close final yesterday at the Allora Showgrounds in Queensland before judge Mark Davey.

Bree and Zoe were up against three of Australia’s leading Kelpie field and yard trialers, who had all won the event multiple times. Keven Howell has won the event a record nine times, Gary White has won it five times and was running previous winners White’s Billy and White’s Chrissie, and Adam has won the trial twice and once with Buster.

The 26 year-old said she has been trialling since 2018 and the national field trial was Zoe’s first utility win at that level.

“She has won a couple of yard trials and has competed in a few field trials.”

She said four-year-old Zoe was breed by NSW breeder Matt Sherwood from Jindara Boss II out of Bocco Doll-Crazy.

The trial involved a 200 metre cast around five Merino wethers, a turning peg, an outside race, a draft and drench race in the yards and then a drive through a gap, and into a free-standing pen.

“They were quite nice sheep,” Bree said.

“If you treated them right they were just really calm and if your dog respected them and took care of them, they responded really well.” Gary White said Bree was a deserved winner and “went like an absolute champion.”

“She handled the dog real well and she stayed as calm and as cool as cool.

“It was really hard-fought final and they weren’t giving the scores in and it was that close that no-one really knew who won until they announced it.” 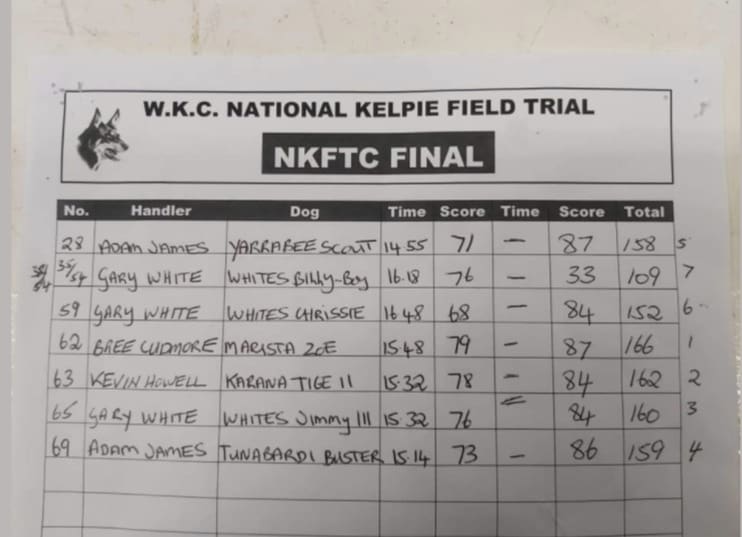 Bree said she had a lot of faith in Zoe.

“She is a very talented little dog.

“There were a couple of spots where the sheep got away from her and came out of the corridors, but I was quite happy with her work,” Bree said.

“She’s a very good dog at reading her sheep, she knows where her distance should be.

“I wouldn’t have travelled all this way if I didn’t think I had the dog or the ability to do it.”

Zoe has put me on the map- Bree Bree said Zoe is one of her top dogs.

“She is very special to me in that she is my first dog that I bought and she has put me on the map when it comes to the trials – she’s an excellent little dog that has got me a very long way very quickly.”

Bree works as the sheep manager at Turkeith Homestead owned by Birregurra wool grower Maryanne Holt, who said she had “tears in my eyes of happiness for her.”

“I’m so happy for her, she is the most beautiful woman, honestly.

“Her dogs are amazing dogs.”

Bree said winning against the calibre of her fellow finalists made the win “extra special.”

“I try not to have that in my head – it’s a good way to psyche yourself out – believing that they’re unbeatable.

“But I was definitely aware coming into the final that I was up against some extremely experienced and good handlers, so I just put my head down and did my job and did what I could do, and it was enough,” she said.

“There was no point sitting there hoping that they would make a mistake, because people like that just don’t, they are too good.”

She will also compete at the Australian Yard Dog Championships in Armidale next week.