A flystrike vaccine is under development at CSIRO’s Chiswick facility near Armidale. Photo: CSIRO

IF the global pandemic has taught us anything, it’s that a single dose of vaccine is not enough to counter some of the world’s nastiest biological threats, and if you’re a sheep, or a wool grower, the Australian sheep blowfly is surely among them.

With Australian Wool Innovation (AWI) funding, CSIRO is developing a vaccine to minimise the incidence of flystrike caused by its larvae and CSIRO senior scientist Tony Vuocolo is leading the project.

Dr Vuocolo said while the commercial release of the vaccine could be 7-10 years away, an idea about how it might fit into the flock’s flystrike management “toolbox” is becoming clearer and this looks like being two injections in early spring.

“With the warmer and wetter winters that we’re getting, flystrike is coming earlier and earlier, and generally we would see that a vaccine would be administered probably very early spring, just as flies are starting.

“Just like our COVID vaccine, it takes a little while before we’re protected by our immune response,” Dr Vuocolo said.

“It’s the same in the sheep, so we would probably follow that first shot with a booster.”

Dr Vuocolo said data from trials being conducted at CSIRO’s Chiswick Research Station at Armidale has shown two doses of the flystrike vaccine delivered within a month could prompt an immune response over the warmer months.

“At the moment, we do three administrations in our prototype work, but we’ve got some results that seem to show that two may be sufficient.”

In 2018, AWI announced it would spend $2.5 million over four years to research a flystrike vaccine that could help counter the affliction which costs the Australian industry more than $324 million annually in management and lost production. 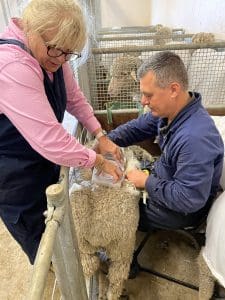 Scientists Suzie Briscoe and Tony Vuocolo are part of the team conducting clinical and paddock trials in the search for a flystrike vaccine. Photo: CSIRO

This research was done with CSIRO in collaboration with the University of Melbourne.

AWI last year approved the spending of a further $650,000 in collaboration with CSIRO to help fast-track a vaccine project, which has the potential to reduce the incidence of flystrike and therefore the need for mulesing.

Some wool growers have already abandoned mulesing and rely on the increased use of plain-bodied genetics to make sheep less attractive to flies, as well as insecticides to minimise flystrike.

However, increased dependence on insecticides comes with its own risk.

“We do have an issue with insecticide resistance.

“There’s been some very effective insecticides used over the years, but their efficacy’s waning over time, as tends to happen with emerging resistance by the insect,” Dr Vuocolo said.

“We are hoping a vaccine will be able to come in and give that added amount of protection that is needed.”

CSIRO’s work on developing a flystrike vaccine started around 30 years ago and Mr Vuocolo said scientific advancements have buoyed hopes for the current project.

The first came when the University of Melbourne mapped the sheep blowfly genome with funding support from AWI.

“That’s been fantastic for us (CSIRO) because we’ve been able to mine all that data and advance leads we had previously developed,” Dr Vuocolo said.

“We had some great results many years ago and now we can expand and rapidly look at a whole lot of different potential antigens, and that’s what we’ve been working on for the past several years.”

“Two prototype vaccines from over 50 that have recently been tested are showing particular promise,” he said.

“One prototype relies on a native-antigen approach, whereby a cocktail of proteins is isolated from larvae cultured in the laboratory using an approach that can be readily scaled up.”

Dr Vuocolo said new technology is also being used for the other vaccine approach by producing the antigen(s) for the vaccine using a recombinant approach.

“We can produce those recombinant antigen proteins in a variety of cells, whether they’re insect cells or bacteria or yeast, and we can use them as mini factories to make our antigens and make vaccines.

“The insect cells are our method of choice for our second prototype vaccine.”

Hurdle between lab and paddock

The challenge Dr Vuocolo and his team have is to get the two prototype vaccines to replicate in the paddock the favourable results they have exhibited in clinical conditions.

While they have been able to demonstrate larval growth stunting by up to 75 per cent, and a degree of larval death in the Chiswick lab trials in a controlled environment, the affected rate fell to less than 20pc in on-sheep field-like conditions.

Chiswick runs a research flock of around 5000 sheep used for sheep health and welfare research, and Dr Vuocolo said once on-sheep field-like trials can replicate clinical results, the vaccine would likely be trialled with commercial wool growers in numerous locations across Australia.

“We already have a lot of very progressive producers out there who have been offering to run trials because they really see the value of the vaccine.”

“It is still at least several years off, as we need to undertake more developmental work and standardisation before we try it in such trials.

“The message I want the industry to hear is that results are promising with our two prototype vaccines, but translating the efficacy from the lab to on sheep and on farm is still a big challenge and will take some time.” Australian researchers have also been working for decades on a vaccine to counter cattle ticks, with CSIRO the initial driver.

“Unfortunately, that wasn’t well taken up by the industry then.”

Dr Vuocolo said anecdotal evidence suggested expectations were that the vaccine alone, rather than an integrated control program to minimise tick infestations, could keep ticks at bay.

“Asking a vaccine to completely stop such complex parasites is not feasible and an integrated pest management approach will hold the key.”

However, the value to industry of having vaccines available to counter parasites cannot be overestimated, and separate projects outside CSIRO are under way to develop a vaccine for cattle tick and a vaccine for intestinal worms in sheep.