Neil Lyon, Grain Central, December 7, 2020
HOT and dry conditions that have afflicted much of Australia will soon pass, paving the way for the La Niña weather pattern to strengthen and bring on a wet summer, according to the Bureau of Meteorology.

Extreme heatwave conditions have been searing south-eastern and eastern Australia as very warm air was pushed across from the middle of the continent by frontal systems, combined with a heat trough over inland Australia.

The nation recorded its warmest spring on record with a mean temperature 2.03 degrees Celsius above average, and both the national mean maximum and mean minimum temperature were the warmest on record for November. Rainfall for spring was 8 per cent below average for Australia as a whole. 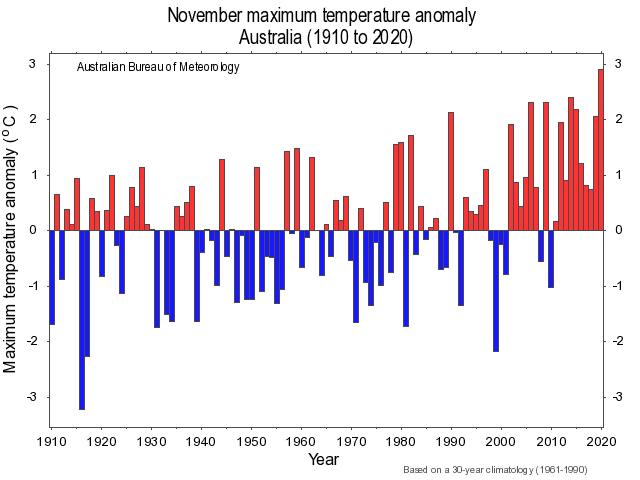 The high temperatures and lack of rainfall fly in the face of the prevailing La Niña which is typically associated with cooler, cloudier, and wetter than average conditions for Australia.

Bureau of Meteorology senior climatologist, Greg Browning, said the La Niña was still in play, but broke down during November due to a very persistent high pressure system over Australia, particularly eastern Australia.

The situation was compounded by the Madden-Julian Oscillation (MJO) being particularly strong on the other side of the globe.

“When it is nearest (to Australia) it will often enhance our rainfall, but when it’s on the other side of the globe it had the effect of changing the wind patterns over the Pacific Ocean,” he said.

“That contributed to the trade winds over Australia breaking down. That, with the high pressure, weakened the La Niña, so there was a warming of the temperatures over the Pacific and a weakening in the Southern Oscillation Index.

“It hasn’t been a super strong La Niña like it was in 2010-2011, so it was prone to short term climate disruptions. It broke down to the extent to let the heat come back, and it was very dry as well.”

However, Mr Browning said the La Niña had picked up again and that meant conditions would become more favourable for rainfall over Australia in the coming week or two.

“The outlook is still on track for above average rainfall right through summer and into early autumn. There are good prospects of widespread rainfall in the next couple of weeks,” he said.

In its temperature recordings for the past month, the Bureau found that all states and the Northern Territory had both mean maximum and mean minimum temperatures amongst the top 10 on record for November.

Maximum temperatures for November were above or very much above average across the majority of Australia, and warmest on record in a large area of the centre of the continent.

The mean maximum temperature for the month was cooler than average for the southern half of the west coast of Western Australia.

A large number of stations in NSW observed record high November daily maximum temperature or their warmest November night on record on the 28th or 29th.

The Bureau reports that rainfall for spring was below average for greater south-east Queensland, extending to the north tropical coast, and into north-eastern NSW, and for western Tasmania.

Rainfall was above average for much of the Kimberley and Pilbara in WA, much of SA except the south-east, western NSW and adjacent far south-west Queensland, and scattered smaller areas in south-west Victoria, south-east NSW, and southern WA.

September was a drier than average month for some areas in the south-east and south-west of Australia, but above average for much of the central third of the country and west of the eastern states.

October was a much wetter month as the La Niña strengthened in the tropical Pacific Ocean, although monthly rainfall was still below average for south-west Western Australia.